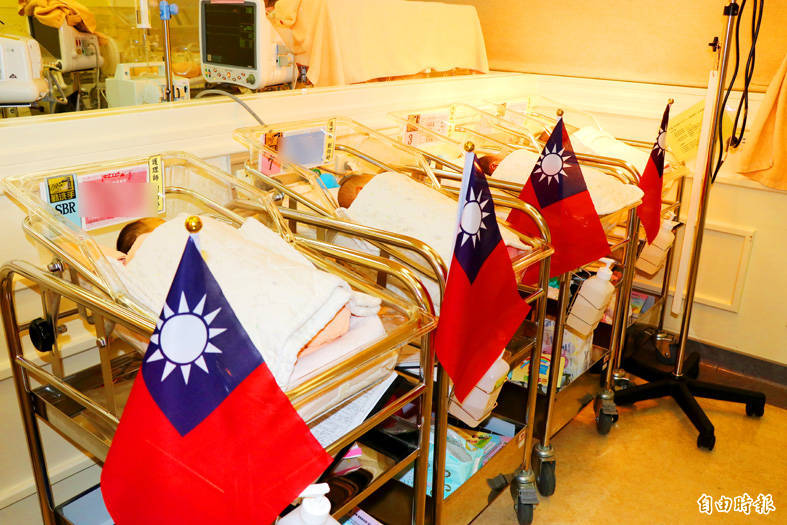 SHRINKING FEMALE POPULATION: Last year, 107.74 boys were born for every 100 girls in Taiwan, which is a greater gender imbalance than in Japan and South Korea

The Ministry of the Interior recorded 9,601 births in January, the first time the nation has produced fewer than 10,000 newborns in a single month, while different indicators showed that Taiwan might also be facing a population with increasingly fewer births, women and marriages.

It comes after the ministry reported a record low 165,249 births last year, which was lower than the 173,156 deaths recorded last year.

The number of births in January also dropped from a year earlier, when there were 12,510 births.

In February, there were 11,497 newborns, ministry data showed.

Statistics continue to show an imbalance in the gender ratio among newborns, with more boys than girls being born.

Although that number has gradually fallen since then, it has continued to fluctuate, the data showed.

The marriage rate has continued to decline, with the number of marriages registered falling to an 11-year low of 121,702 last year.

Alice Cheng （鄭雁馨）, an associate research fellow at Academia Sinica’s Institute of Sociology, yesterday said that in Taiwan, the ratio of male births to female births remains high — greater than in Japan and South Korea — and the nation’s female population is shrinking.

The “natural” sex ratio at birth should be about 104 to 106 males born for every 100 females, she said, adding that any number that is higher than that is considered a gender imbalance.

People’s preference for boys over girls resulting in sex selection or the killing of female embryos might be the cause of overly high male to female ratios at birth, she said.

Among Asian countries, the male-to-female ratio at birth began to climb in the mid-1980s, she said, adding that it reached almost 120:100 in China when the disparity was at its highest.

Cheng said that Japan’s ratio might be relatively balanced due to a realization following the Meiji Restoration that girls are a foundation of the nation’s power and should receive an education.

In South Korea, with government intervention, the ratio has returned to “normal” levels in the past few years, she added.

Commenting on the number of births in January, Cheng said that the COVID-19 pandemic might have led to delays in wedding ceremonies, resulting in fewer married couples and newborns.

Whether the pandemic was the main cause of the decline in births in January could be judged by whether the number of births subsequently rises or falls, Cheng said.