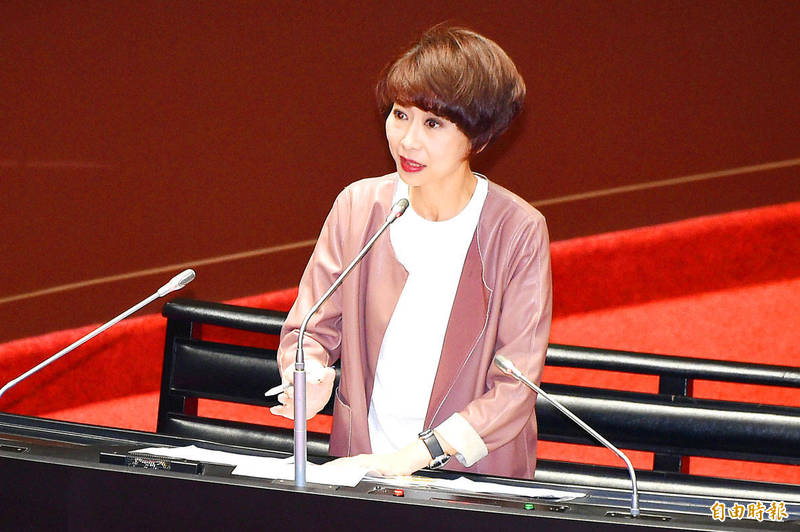 More than 5,100 Chinese publications were sold in Taiwan from 2018 to last year, but the publishers of only 237 of them, or 4.6 percent, had applied for permission to distribute them, Chen said, adding that the Ministry of Culture needs to enforce the law.

At a news conference in December last year, Chen said that a Chinese picture book, Waiting for Dad to Come Home （等爸爸回家）, had been donated to libraries and sold at bookstores, despite its Taiwanese publisher not being given permission.

The book hailed China’s COVID-19 response by featuring the story of a Chinese boy whose father, a doctor, was unable to return home for the Lunar New Year holiday because he was battling the pandemic, she said.

Among the propaganda elements in the book were stars forming the words “Go China” and “Go Wuhan” on cityscape illustrations of Beijing and Shanghai, she said.

“It is all about glorifying China’s COVID-19 response and is not of educational value for kids,” she said.

The Act Governing Relations Between the People of the Taiwan Area and the Mainland Area （台灣地區與大陸地區人民關係條例） says that publications from China must be authorized, with breaches punishable by a fine of NT$40,000 to NT$200,000.

“However, the ministry merely asked the publisher to take the book off shelves and did not impose a fine,” Chen said on Thursday.

“When we revealed the case last year, Minister of Culture Lee Yung-te （李永得） said that he would propose amendments to require permission only for books from publishers belonging to the Chinese Communist Party or the Chinese People’s Liberation Army,” she said.

“However, four months later, the ministry has done nothing about this matter,” she said.

Lee in February said that the regulations covering Chinese books were seldom enforced.

Only four complaints have been filed against Chinese publications in the past decade, Chen said.

After Chen revealed the alleged breaches in December last year, the ministry sent notices to remind publishers to comply with the law, sources said, adding that several publishers thought it was a new regulation, and not an existing one.

DPP Legislator Tang Hui-jen （湯蕙禎） said that China has a campaign to “brainwash” Taiwanese through such publications.

“Many unauthorized Chinese books on the market are tools in China’s united front strategy to influence our citizens,” Tang said. “I have proposed a bill to prohibit all publications promoting China’s communist ideology and those using united front tactics, as they must be banned.”

“The bill was taken off the agenda in a legislative committee meeting, but I will reintroduce it,” she said.

“Enforcement of these rules is not restricting freedom of publication and it is not about censoring books,” Tang said. “People must comply with the law governing cross-strait relations because of Taiwan’s and China’s unique political histories.”

Taiwan is a democratic country with freedom of expression and freedom to publish, and the government does not censor books, but “we have regulations covering the distribution of Chinese books, and publishers must not break the law,” she said.

The government should determine whether Waiting for Dad to Come Home is the tip of an iceberg and “whether other Chinese books that promote Beijing’s political ideology are secretly flooding into Taiwan,” Tang said.

Ministry officials said that checks are being carried out on Chinese books on the market.

The Mainland Affairs Council said it would work with the ministry to ensure that the law is enforced.