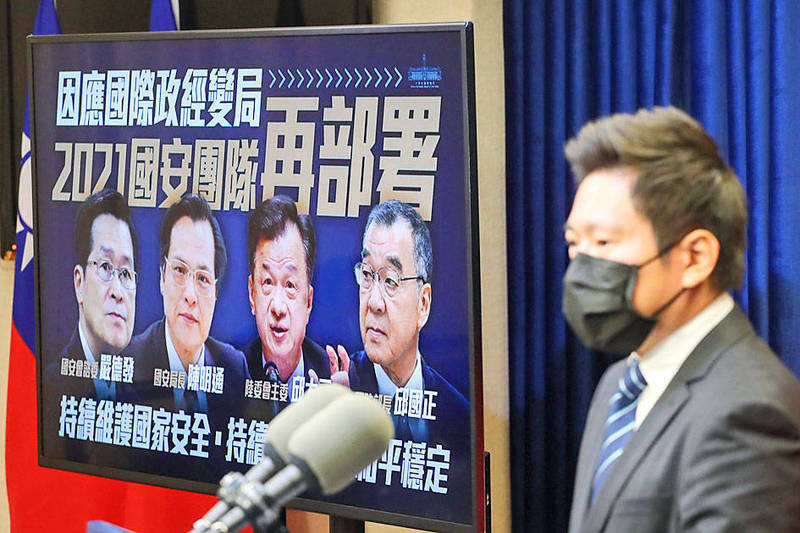 SECURITY RESHUFFLE: President Tsai Ing-wen believes the changes to the national security team will help meet the challenges of a post-pandemic world

The transition for the four officials to their new posts is to begin next week, he added.

Tsai believes the adjustments to the national security team are necessary to meet the challenges of a post-COVID-19 pandemic world where the regional and international situation has changed, Chang said.

Tsai decided on the changes after comprehensively reviewing the situation and consulting with Premier Su Tseng-chang （蘇貞昌）, Chang added.

Commenting on the reshuffle, the Chinese Nationalist Party （KMT） legislative caucus issued a statement saying the rehashing of the same cast of national security officials is a “seat and circle game” that brings no value to the relationship across the Taiwan Strait or with the US.

Having Chen, who has no military or intelligence background, assume the role at the bureau is a step forward, DPP Legislator Wang Ting-yu （王定宇） said, adding that Chen would be able to bring a new perspective to the NSB with his knowledge of cross-strait affairs.

Chiu Tai-san’s background in law and his appointment to the MAC position suggests that the government is considering national security-related laws as a point of reference when handling cross-strait affairs, as well as Hong Kong and Macau affairs, he added.

DPP Legislator Lo Chih-cheng （羅致政） said that Chiu Kuo-cheng’s experience in intelligence would be a boon to the Ministry of National Defense.

Taiwan People’s Party Legislator Ann Kao （高虹安） said that Chiu Tai-san, Chiu Kuo-cheng and Chen are all close aides of Tsai and the reshuffle of their positions seems to be nothing but a round of musical chairs.

The reshuffle shows that Tsai’s circle of confidantes remains closed and small, she added.

However, Kao said that from the perspective of a new US president, appointing experienced individuals to these positions might be the safest move.