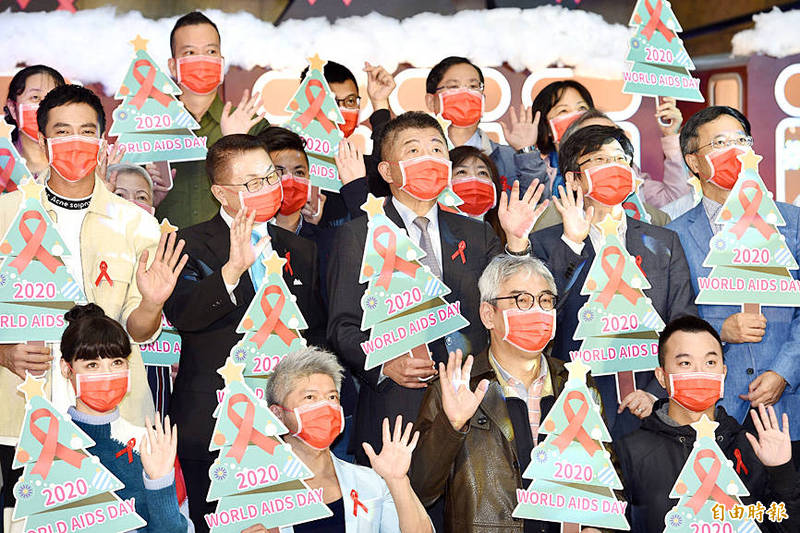 The number of people diagnosed with HIV/AIDS annually in Taiwan has been falling for the past three years, and it is expected to drop by 20 percent this year, the Centers for Disease Control （CDC） said yesterday.

To mark World AIDS Day tomorrow and to raise public awareness on HIV/AIDS, the CDC collaborated with Breeze Group to place a Christmas train art installation in the main hall of Taipei Railway Station.

There are about 40,000 people with HIV/AIDS in Taiwan and about 33,000 are receiving treatment, CDC Director-General Chou Jih-haw （周志浩） said.

The installation conveys the message that HIV/AIDS can be prevented and treated, and that people can work together to help prevent infection, he said.

The theme for this year’s World AIDS Day is “Global solidarity, shared responsibility.”

As of last month, 1,190 people had been newly diagnosed with HIV/AIDS this year, 317 fewer than the same period last year, CDC data showed.

Minister of Health and Welfare Chen Shih-chung （陳時中） said that when he was the deputy head of the then-Department of Health from 2003 to 2005, there were about 3,000 to 5,000 newly diagnosed cases of HIV/AIDS every year.

However, thanks to efforts to raise public awareness, such as urging people not to share needles or syringes, as well as improvements in treatment, the number of people with HIV/AIDS has fallen, he said.

UNAIDS’ goal for 2030 is to reach 95-95-95, Chen said, adding that while he believes Taiwan can achieve the goal, he also hopes to achieve “zero discrimination, zero infection and zero death.”