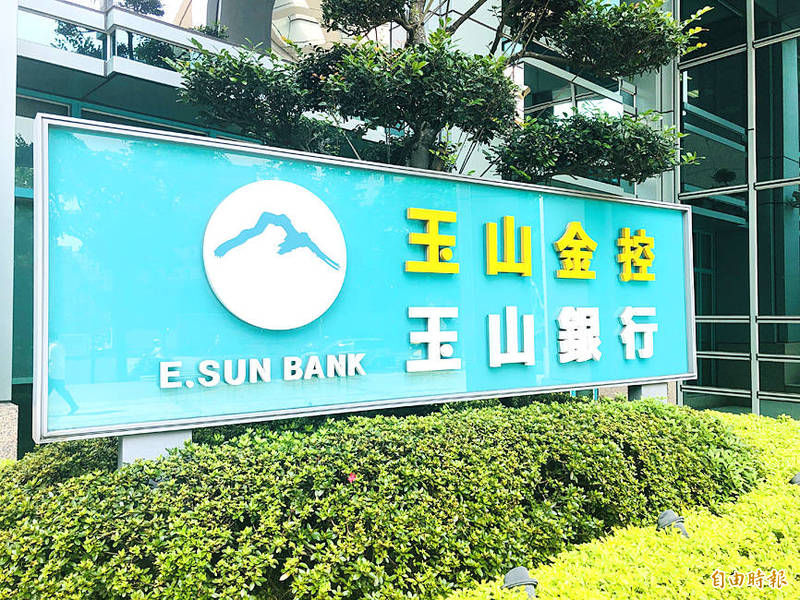 A sign displaying the logo of E.Sun Financial Holding Co stands outside the company’s headquarters in Taipei in an undated photograph. Photo: Kelson Wang, Taipei Times

SETTING AN EXAMPLE: The commission suspended the bank’s two top executives as ‘a warning to all banks,’ while the fine is the biggest to be given to a bank in a single case

A customer relationship manager surnamed Pan （潘） at the bank’s branch in Kaohsiung’s Fengshan District （鳳山） stole NT$140 million from 41 clients over the past seven years, the commission said.

Pan secretly transferred the stolen money to accounts belonging to her and her family members by using clients’ debit cards, passwords or documents that were stamped using the clients’ personal stamps between July 2013 and June this year, the commission said.

The fine is the biggest to be levied on a bank in a single case, as it was not E.Sun’s first offense, Chuang said, adding that the bank was fined NT$12 million in February after another manager stole NT$36 million from clients.

Unlike fines imposed on banks for similar scandals in the past, the commission gave E.Sun’s top executives a heavy punishment as the regulator aims to hold top executives accountable to maintain financial discipline, FSC Chairman Thomas Huang （黃天牧） said.

“People follow the example of their superiors… Our punishment for the two top executives is a warning to all banks,” Huang said.

The FSC spent two months investigating Chen and Chang to ascertain whether they were responsible for the breach, he said.

Although the bank has barred relationship managers from withdrawing cash or transferring money on behalf of their clients, the bank’s deposit and transfer division staff still helped Pan conduct the transfers, for which Chen was to blame as he oversees the division, Chuang said.

Besides the two top executives, the bank’s risk management department and audit department also need to improve their practices as they failed to detect the irregular transactions, she said.

E.Sun Bank’s BIS capital ratio would be reduced to 13.75 percent, from 14.02 percent, as the commission thinks that the bank has a higher risk than its current estimate, Chuang said.

E.Sun Bank is also likely to see its scores in the Taiwan Stock Exchange’s corporate governance assessment fall next year, which would likely affect its share price, the commission said.