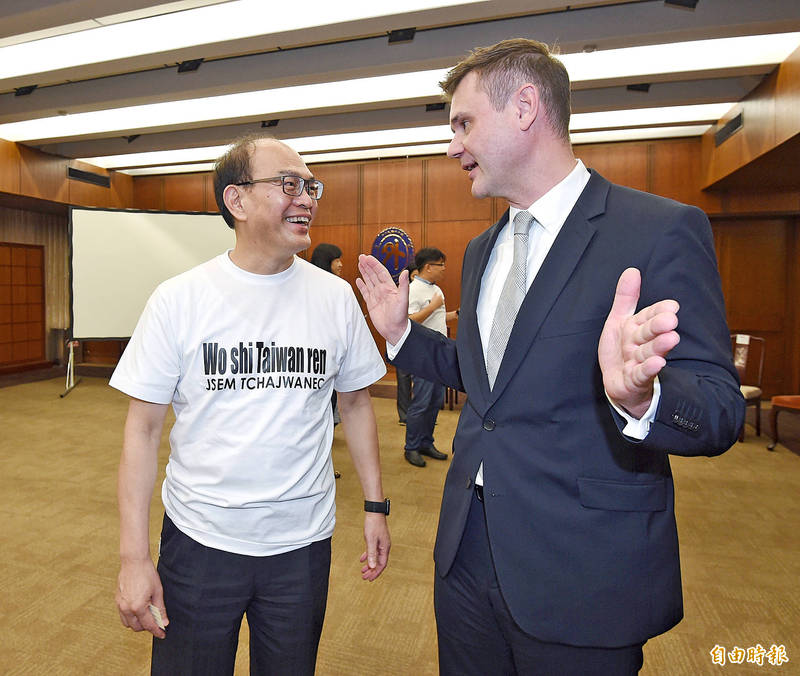 Seven Taiwanese universities are to offer 50 scholarships for Czech nationals to study Chinese in Taiwan, one of the achievements of a visit by a delegation headed by Czech Senate President Milos Vystrcil, the Ministry of Foreign Affairs said yesterday.

Deputy Minister of Foreign Affairs Harry Tseng （曾厚仁） and university representatives, wearing T-shirts emblazoned with the words “I am Taiwanese” in Romanized Chinese and Czech, revealed details about the scholarships at a news conference in Taipei.

“I am Taiwanese” refers to a statement Vystrcil made in a speech on Sept. 1 at the Legislative Yuan.

Just as former US president John F. Kennedy supported West Berlin’s pursuit of freedom by proclaiming “Ich bin ein Berliner,” Vystrcil at the time said that he would also like to express his support for Taiwan and freedom with a more humble, but equally strong statement: “I am Taiwanese.”

Tseng thanked Vystrcil and other Czech representatives again for visiting Taiwan from Aug. 30 to Sept. 4, despite pressure from China.

Speaking in a videoconference, University of Chemistry and Technology Prague rector Pavel Matejka, who also visited Taiwan with Vystrcil, thanked the ministry for realizing its promise to expand academic cooperation between the two countries.

All of the schools have Chinese language centers recommended by the Ministry of Education, Department of European Affairs Director-General Johnson Chiang （姜森） said.

The scholarships, starting from next year, are to be distributed among the seven universities, which are to decide the conditions and qualifications for selecting applicants, he said.

The schools are to submit their proposals to the ministry, which would offer subsidies for the program, he said, without elaborating on the duration of the scholarships or the amount of the subsidies.

While the ministry has demonstrated its goodwill, it could have presented a more detailed plan or discussed it with the Ministry of Education before announcing it, a source familiar with the matter said.

While the seven schools have submitted their plans, it is not clear why the ministry chose those seven over others that also have Chinese language centers, the source said.

It is also not clear how extensive or how long the program would be, the person said.

If the announcement is intended to be “a gift” for Vystrcil prior to the Czech Senate election on Friday and Saturday, it should have been better planned to become a sustainable project that could benefit more universities, the source added.

Hasty planning might turn the program into a political show without sustainable funding, the source said.

Taiwan is a better place than China for learning Chinese due to its democracy and freedom, while preserving traditional Chinese culture better than many other places in China, Fu Jen Catholic University vice president for mission Leszek Niewdana said.

A Czech student in Taiwan speaks at a news conference in Taipei yesterday, at which the Ministry of Foreign Affairs announced 50 scholarships for Czechs to study Chinese in Taiwan. Photo: Liu Hsin-de, Taipei Times