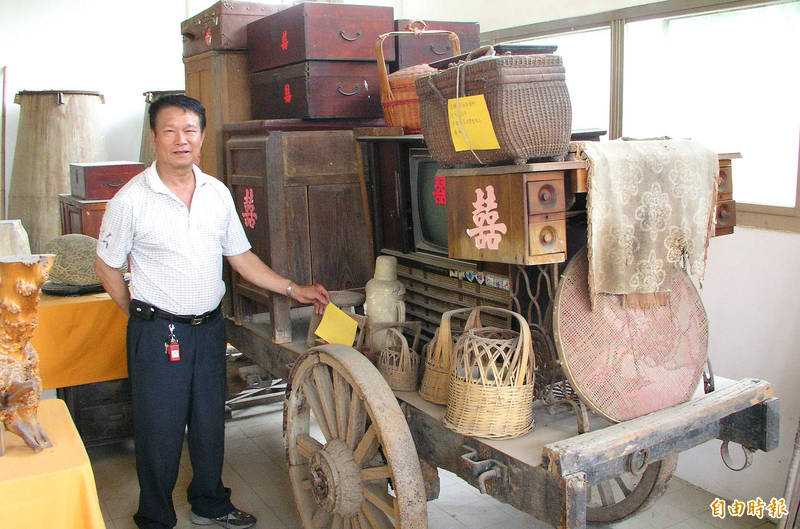 In the old days, a bride’s dowry could fill up an entire oxcart. Photo: Chu Chun-yen, Taipei Times

If word got out that you were planning a wedding during the Martial Law era, the “Committee for the improvement of Folk Customs” （改善民俗實踐會） might knock on your door.

Each borough in Taipei had at least one “agent” who kept a pulse on community happenings. They would visit the family planning the wedding with a letter from the mayor, touting the benefits of being frugal and not wasting money on lavish ceremonies, even encouraging the families to donate money for scholarships. The authorities also discouraged them from hiring musicians and dancers, who were often loud and caused conflict with neighbors.

Those who donated the amount for scholarships received a certificate from the government. Big-money donors were personally commended by the mayor. The city’s district offices competed in donations received, and by 1984, nearly 6,000 students had benefited from the scholarships.

Although the Chinese Nationalist Party （KMT） had been preaching austerity since it took over Taiwan in 1945, old habits die hard, especially those tied to social status. On Sept. 24, 1979, the Taipei City Government updated its existing guidelines on weddings, funerals and rituals for other celebratory events such as childbirth.

Regarding weddings, the city discouraged exchanging bride prices and dowries and even gifts and wedding pastries; suggested that people join mass weddings or registrations instead of holding their own; and if they insisted on holding a wedding ceremony, they should only invite family and close friends, and refrain from throwing banquets and putting on “improper entertainment.”

“[W]eddings, funerals and other celebratory events ... are rife with unnecessary extravagance and meaningless wastefulness, and have become avenues for people to flaunt and show off. This has led to negative societal attitudes of excess, which is very worrisome,” Chen writes.

Before the Japanese arrived in 1895, the Han Taiwanese-style wedding had remained mostly intact for centuries. The settlers preserved the Chinese custom that weddings were indicators of social status, and strived to make them as fancy as possible.

The Japanese brought great change to Taiwanese customs. They tried to stamp out certain “backward” practices, and their efforts were often supported by the Taiwanese elite, who sought to keep up with the modern world. For example, it was Taiwanese intellectuals who set up associations aimed to eradicate customs such as wearing one’s hair in a queue and foot binding.

Marriages were not always legally binding at first, and only after 1905 did the Japanese require all newlyweds to register with the government within 10 days of the union. That year, the first Taiwan Daily News （台灣日日新報） report criticizing the lavishness of local weddings appeared, urging people not to choose spouses not just for their wealth but also their character. In July, the newspaper hosted an essay contest with the subject “10 positive and negative Taiwanese traditions,” and many wrote about the overly materially-focused weddings.

By the early 1910s, reports show that some Taiwanese began to incorporate Western influences into their weddings, with grooms wearing suits and brides donning white wedding gowns. Some opted for horse carriages instead of sedan chairs, and hired troupes playing Western-style music. People mixed and matched as they pleased, and no two weddings were the same. These modified events were referred to as “civilized weddings” or “new weddings,” and couples started going on honeymoons during this time too.

Under the government’s support, the Han elite in 1915 set up various “custom improvement groups.” This pushed Taiwanese weddings in Taipei further toward the Western side, and the custom of hosting them at banquet halls or restaurants gained popularity.

At the height of World War II in 1942, the Japanese also urged frugality, and like their successors, they tried to ban bride-prices and place limits on the value of gifts.

Due to economic hardships after the war, most Taiwanese had no choice but to keep their weddings and funerals bare-bones. But after the economy stabilized in the 1950s and took off in the 1960s, these occasions became increasingly lavish once again.

Chen criticized large wedding celebrations as unnecessarily extravagant. The groom often had to prepare a bride-price the equivalent of several months salary, or spend a similar amount of money on wedding pastries. The bride’s dowry included household appliances such as washing machines and televisions, and sometimes even an apartment.

“If the two are on similar economic standing, maybe there’s no problem, but it’s very troublesome for those who don’t have the financial means but feel compelled to scrape up the money just to save face,” Chen writes.

Chen was also strongly against the hosting of large banquets or parties. He notes that the government had fixed part of the problem by limiting public servants to 10 tables per wedding; those who broke the rules could receive a demerit and even fired. But there were always ways to circumvent the rules. For example, some would hold multiple banquets in different cities to boost the guest count.

In the 1970s, former president Chiang Ching-kuo （蔣經國） personally promoted the concept of a “plum blossom meal” during banquets — five dishes arranged around one pot of soup to resemble the flower. Some did follow the suggestion, while others again found a loophole by serving two or even three plum blossom meals in succession.

It’s unclear exactly how successful these policies were, and many Taiwanese weddings today remain quite the affair — although local governments continue to encourage frugality by hosting mass registrations and ceremonies each year.

In fact, the government is probably more concerned about convincing young people to marry and have children than wastefulness these days.

The bride and groom in this undated Japanese-era wedding photo are dressed in Western-style attire, a shift that began in the 1910s. Photo courtesy of Wikimedia Commons