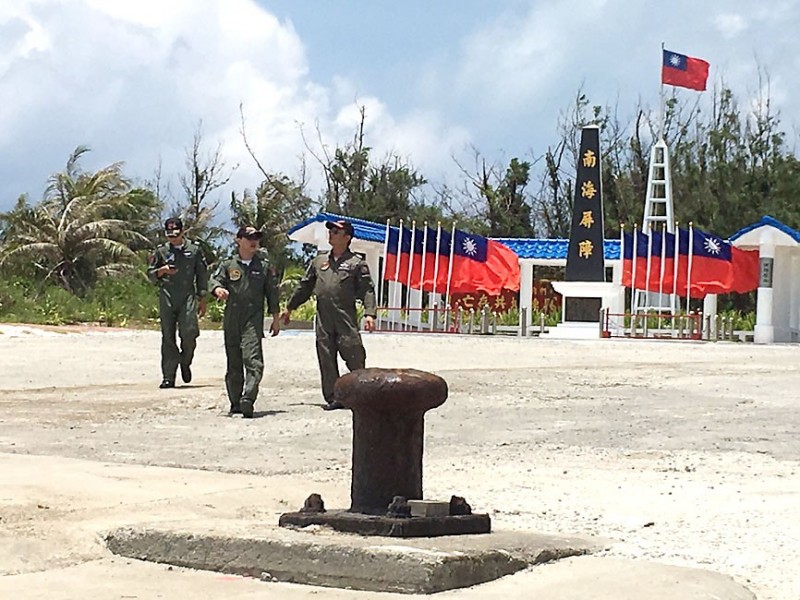 Military personnel walk on the dock of Pratas Island on Aug. 12, 2017. Photo: CNA

In an interview with Hong Kong’s Bauhinia Magazine published on Saturday last week, PLA National Defense University professor Li Daguang （李大光） confirmed that the Chinese army was planning to stage a simulated invasion of the Pratas Islands in the South China Sea this month.

The islands comprise three atolls, with Pratas Island, at 1.74km2, being the largest. They lie southwest of Taiwan proper in the South China Sea about 444km from the Kaohsiung Harbor.

In response, the Ministry of National Defense has stationed a large number of Marine Corps officers on Pratas Island, a source said yesterday.

A contingent of coast guard officers has also been stationed on the island as part of the ministry’s response, the source said, adding that all of the officers were dispatched from Taiwan proper.

The ministry would not comment on the deployment of officers to the island, saying only that it would “respond accordingly to changes in the situation,” while urging the public to remain calm.

Japan’s Kyodo news agency in May first reported about the PLA’s plan to stage a simulated invasion of the islands this month, but China had not confirmed the speculation until Li’s interview.

However, Li did not specify the time or specific location of the planned drill.

The islands initially had a permanently stationed contingent of marines, but the job of protecting them was given to the Coast Guard Administration in 2000.

The Marine Corps’ 99th brigade would now protect the islands jointly with the coast guard in response to the renewed PLA threat, the source said.

The stationing of officers on the island would also serve to relieve coast guard officials who have been monitoring the islands, and would allow them to return to Taiwan proper during their time off, other military sources said.