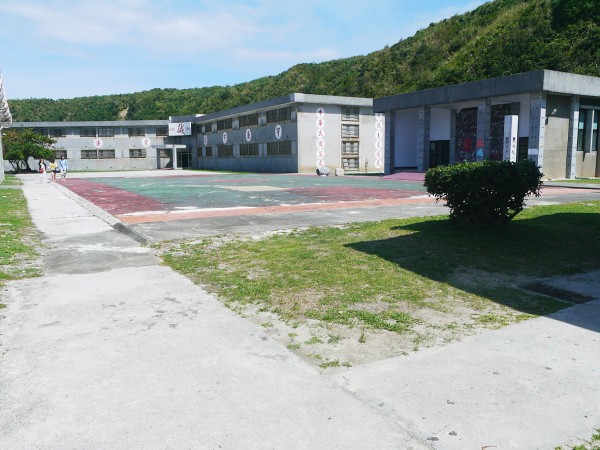 The basketball field at the Green Island Human Rights Memorial Park is pictured on Aug. 12. The Ministry of Culture has given approval for the Red Bull King of the Rock basketball tournament to be played at the park next month. Photo: Courtesy of the National Human Rights Museum

FOUL BALL? The Ministry of Culture is under fire for allowing a 'commerical' event at the former prison, which for decades housed political prisoners under martial law

The scheduling of the Red Bull King of the Rock one-on-one basketball tournament on Green Island （綠島） next month has drawn controversy, with critics questioning the propriety of holding a commercial event where thousands of political prisoners were incarcerated during the Martial Law era.

Tuan referred to a report in the Liberty Times （the Taipei Times’ sister newspaper） criticizing the ministry and saying that the tournament would “hurt the island.”

The Liberty Times said that it had received a letter from a reader accusing the ministry of double standards because it had refused permission for an artist and bakery owner, whose bakery had provided the cake for the opening ceremony of the Taiwan Film Institute, to cut the cake because it would be “commercial behavior,” yet it was cooperating with a foreign beverage company by lending the memorial park for a basketball game.

Tuan said it was not right for a “carnival-like commercial activity” to be allowed at a place that represents Taiwan’s “darkest days, when the ruler deprived people of their rights, restricted personal and spiritual freedom and murdered political enemies out of his desire for absolute power.”

Calling the island-prison-turned-memorial park a place where “every power holder should humbly reflect,” Tuan asked whether the Polish government would sanction an energy drink company holding a basketball tournament at the former Auschwitz concentration camp.

Wang Yi-chun （王逸群）, director of the Preparatory Office of the National Human Rights Museum, responded to the criticism by saying that the museum was only providing a venue for the event, not helping sponsor it.

“We know that it is a holy place and have had at least five meetings with organizations of former political prisoner to thrash out issues. The elders believe that this could be a good opportunity to reshape the image of Green Island among the younger generation, since for the majority of people it is simply a tourist site or a prison for ‘big shot criminals’ [gang members and suspected gangsters were interned there in the 1980s and 1990s]. The history of the country’s White Terror could be re-learned,” Wang said.

Wang said that players from 26 countries are expected to participate in the tournament and tour guides, trained by former political prisoners, are to introduce and tell stories about Green Island, which is also known as Samasana Island.

“Victims of political persecution said they used to play basketball in the same exercise yard, but the difference is that the young people would be playing as free men and they could cherish the hard-earned freedom,” Wang told the Taipei Times.

He said there would not be any commercial activities during the tournament.

The Preparatory Office has also requested that Red Bull provide information about Taiwan’s human rights history and the historical background of the park on its Web site for the tournament, he said.

The event logo features the park’s “Bakua Building” （八卦樓）, which is described as a “cross-shaped prison” that was home to “thousands of political prisoners during the White Terror era of Taiwan （1949-1987）” on the Web site.

They said it could help people pay more attention to the island’s history and Taiwan’s democratic achievements.

There is a chance that Green Island could be confused with a penitentiary for common criminals, since the Red Bull tournament was previously held on Alcatraz Island and that misperception might have upset Tuan and others, Taiwan Association for Truth and Reconciliation executive secretary Yeh Hung-ling （葉虹靈） said.

“It shows that the selection [of Green Island] was not entirely baseless, since the island did have common criminals behind bars as well,” Yeh said.

However, since the tournament is a one-time, non-commercial use of the park space, and the promotional campaign makes conspicuous mention of the museum and the island’s historical context, there is “no obvious reason to object to it,” she said.

It might also be the reason why the related groups support the event, Yeh said, saying that two former political prisoners, both in their 80s, even appeared in a promotional video playing basketball.

The tournament on Green Island will be the first time the “Red Bull King of the Rock” finals have been held outside Alcatraz, which is off San Francisco, California, since the event was launched in 2010.