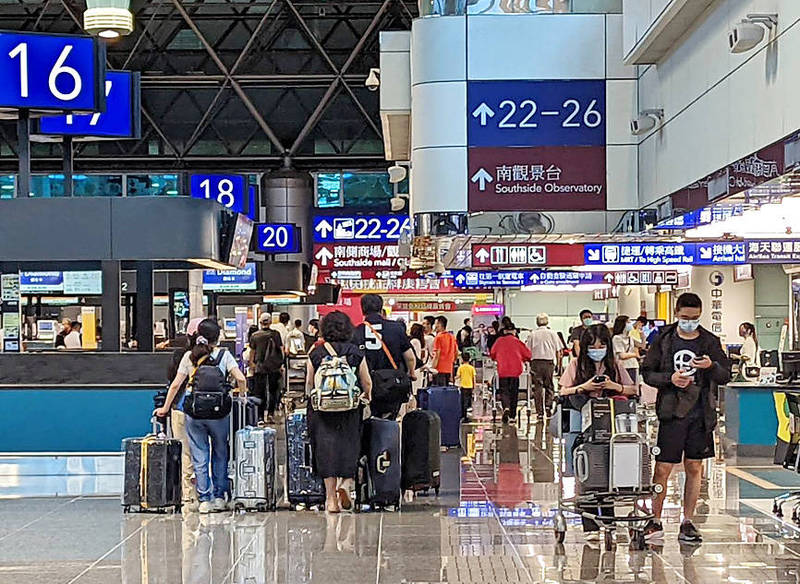 NOVEMBER ELECTIONS: The KMT urged the CECC to exclude Taiwanese from the arrivals cap, as they would lose their right to vote if they could not return by July 26

Travelers with masks walk through a terminal at Taiwan Taoyuan International Airport on Wednesday last week.

The COVID-19-related border control measures and the cap on the number of international arrivals are not being eased, the Central Epidemic Command Center （CECC） said yesterday as it reported 112 imported cases of the Omicron subvariants BA.4 and BA.5 of SARS-CoV-2.

Centers for Disease Control （CDC） Deputy Director-General Chuang Jen-hsiang （莊人祥）, who is CECC spokesperson, said a meeting was held yesterday morning in which the Cabinet decided that current border control measures would remain in place.

He said the main considerations were global COVID-19 cases increasing 21 percent last week, imported cases of Omicron subvariants BA.4 and BA.5 continuing to be detected and passenger flow being expected to increase during the summer, so the international passenger arrival cap would remain at 25,000 people per week.

The CECC would continue to monitor the number of domestic infections and severe cases, as well as healthcare capacity, when conducting reviews of border control measures, he said.

The “3+4” quarantine policy — three days of home quarantine, followed by four days of self-disease prevention — that all inbound travelers have to follow, which was implemented on June 15, would also continue, Chuang said.

Most neighboring nations had waited until their number of new cases fell from the peak to a lower level before loosening their quarantine measures, but Taiwan already loosened its measures on June 15, when daily local caseloads were still relatively high, so the center would need to observe the impact for a little longer before deciding if the quarantine rules can be dropped, he said.

The Chinese Nationalist Party （KMT） yesterday urged the CECC to exclude Taiwanese from the 25,000 people per week passenger arrivals cap, citing many overseas Taiwanese who would lose their right to vote in elections in November if they could not return to Taiwan before July 26 and complete their household registration.

After the cap was imposed, about 41,000 Taiwanese returned between June 15 and Saturday, he said.

CDC Deputy Director-General Philip Lo （羅一鈞）, deputy head of the CECC’s medical response division, said genome sequencing of the virus samples collected from 182 imported cases, who arrived between June 9 and June 26, found that 112 were infected with the BA.4 or BA.5 subvariants of Omicron, or 61.5 percent.

Genome sequencing of virus samples from 476 domestic cases since May 1 showed that none of them were infected with BA.4 or BA.5, so the two new subvariants have not yet been detected spreading in local communities, he said.

However, the number of cases are increasing in Singapore and Japan due to local spread of BA.5, so the center advised people to wear a mask and frequently wash their hands when visiting other nations.

Lo said a one-year-old girl, who had encephalitis and pneumonia after infection, died of encephalitis four days after being diagnosed with COVID-19, adding that so far 21 children had died of severe illness, including seven with encephalitis.