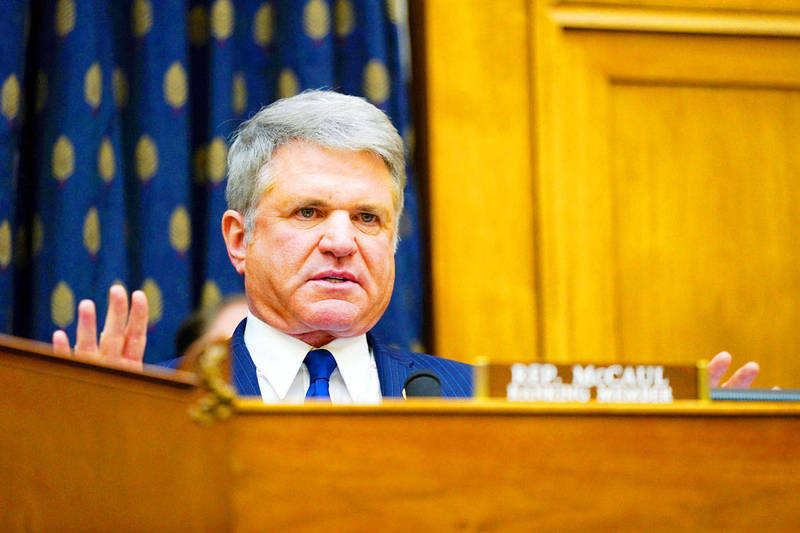 ‘CCP AGGRESSION’: The bill aims to ensure that arms already purchased by Taiwan and other regional allies are tracked and delivered as efficiently as possible

Two US lawmakers on Thursday introduced a bill to the US Congress to track and expedite the delivery of US arms sold to Taiwan amid growing tensions between Taipei and Beijing.

The arms exports delivery solutions act was introduced by Republican US representatives Young Kim and Michael McCaul, who are both on the US House of Representatives Foreign Affairs Committee.

The bill seeks to ensure that “defense equipment already purchased from the US by Taiwan and other allies in the [Indo-Pacific] region are tracked and delivered as efficiently as possible as the Chinese Communist Party [CCP] eyes further aggression,” Kim said in a statement.

“Delayed deliveries of congressionally approved sales to Taiwan are undermining our ability to deter an attack from China,” McCaul said. “This is incredibly concerning as China ramps up its belligerence towards Taiwan.”

China says it wants to unify with Taiwan through peaceful means, although it has not denounced the use of force to achieve that goal. It has stepped up economic, political and military pressure on Taipei over the past few years, as the Democratic Progressive Party government refuses to accept the so-called “1992 consensus.”

As a result, some US lawmakers have spoken out in favor of prioritizing weapons sales and deliveries to Taiwan.

The bill would require US President Joe Biden’s administration to submit a report to Congress before March 1 next year listing the approved sales of US defense articles or services worth US$25 million or more to Taiwan, Japan, South Korea, Australia and New Zealand that have not been fully delivered.

The report should provide reasons for any changes or delays on the part of the US in its transfer of the approved defense items while outlining possible measures the US can take with the Congress’ authorization to provide “interim capabilities or solutions” to its partners subject to such delays.

The report should also provide a description of “the actions the United States is taking to expedite deliveries of defense articles and services to Taiwan,” the bill says.

Prioritizing the defense needs of Washington’s allies and partners is “a national security priority,” and the US’ sustained support for the defense of its key partners benefits Americans and international trade, it says.

The “1992 consensus” — a term that former Mainland Affairs Council chairman Su Chi （蘇起） in 2006 admitted making up in 2000 — refers to a tacit understanding between the Chinese Nationalist Party （KMT） and the CCP that both sides of the Taiwan Strait acknowledge that there is “one China,” with each side having its own interpretation of what “China” means.