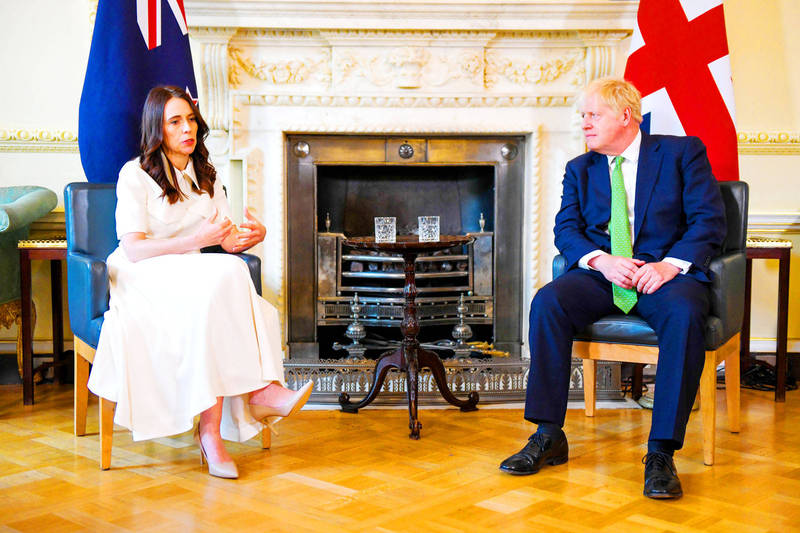 CALL FOR DIALOGUE: The leaders of the two countries highlighted the importance of peace and stability in the Taiwan Strait in a joint statement following a meeting

The UK and New Zealand are committed to a stable Indo-Pacific region, and emphasize the importance of peace and stability across the Taiwan Strait, the leaders of the two countries said in a joint statement on Friday.

The UK and New Zealand “underscore the importance of peace and stability across the Taiwan Strait and encourage the peaceful resolution of cross-Strait issues via dialogue,” the statement said.

The two also expressed their commitment to peace and stability in the Indo-Pacific region, while voicing support for freedom of navigation and overflight in the South China Sea and beyond, in accordance with the UN’s Convention on the Law of the Sea.

They pledged to step up efforts to “support an international system that is based on the rule of law, free from illegal and unilateral aggression, and economic coercion, where human rights are upheld and the freedom and sovereignty of all countries are protected regardless of their size.”

The two expressed “grave concerns” over “the erosion of rights and freedoms in Hong Kong” as Chinese and Hong Kong authorities marked the 25th anniversary of the handover of the former British colony to Beijing on Friday.

Ardern was in the UK for the final leg of her visit to Europe.

She also addressed the NATO summit in Madrid on Thursday, expressing concern that China has become “more assertive and more willing to challenge international rules and norms.”

“We must stand firm on the rules-based order, call for diplomatic engagement, and speak out against human rights abuses at all times when and where we see them,” she said.

British Secretary of State for Foreign, Commonwealth and Development Affairs Liz Truss told the NATO summit on Wednesday that “the free world [should] work together to help ensure that Taiwan is able to defend itself.”

“I do think that with China extending its influence through economic coercion and building a capable military there is a real risk that they draw the wrong idea which results in a catastrophic miscalculation such as invading Taiwan,” Truss said.

Chinese Ministry of Foreign Affairs spokesman Zhao Lijian （趙立堅） at a news briefing on Thursday called Truss’ comments “irresponsible,” adding that the Chinese government had lodged a protest with the British government over the matter.