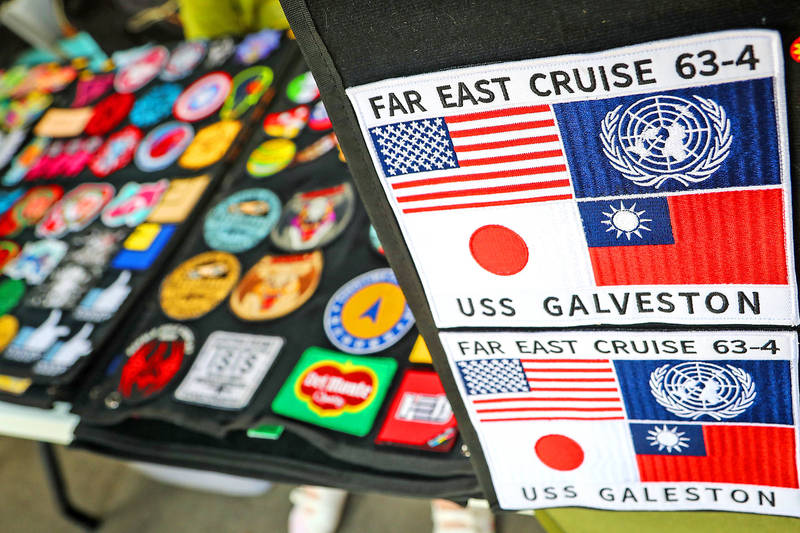 Reproductions of a naval patches incorporating the Republic of China and Japanese national flags, which were used in the movies Top Gun and Top Gun: Maverick, are displayed for sale at the Sanchong Air Force Military Kindred Village No. 1 in New Taipei City yesterday. Photo: CNA

BACK IN THEATERS: After Tencent dropped out of the project, for fear of provoking Beijing’s ire, a patch with the ROC flag from the first ‘Top Gun’ was added back in

Top Gun: Maverick, the sequel to Tom Cruise’s 1986 box office hit about jet pilots, had generated NT$453 million （US$15.24 million） at the box office in Taiwan as of Friday, making it the US actor’s highest-grossing film in the domestic market.

Top Gun: Maverick is to be shown in IMAX and 4DX theaters this week, said VieShow Cinemas, a movie distribution company and one of the nation’s largest theater chains.

IMDb’s Box Office Mojo showed that the action-drama film has so far grossed more than US$918 million globally since its worldwide debut late last month.

In 2019, a trailer was released showing a scene in which Cruise wears the iconic bomber jacket his character, Captain Pete “Maverick” Mitchell, donned in Top Gun.

In the first film, the back of the jacket included a patch that displayed the flags of the Republic of China （ROC） and Japan, which were meant to commemorate the USS Galveston’s tour of duty with the US Navy’s Seventh Fleet from 1963 to 1964, when it performed missions off Japan and Taiwan.

In the 2019 trailer, both flags were replaced with generic symbols with colors similar to the flags on the original patch.

Foreign media reports at the time said that the flags were allegedly removed to appease Chinese censors, and also because Chinese tech giant Tencent Holdings was initially set to back the US$170 million film.

However, the Wall Street Journal late last month reported that Tencent had pulled out over concerns that supporting a film celebrating the US military could anger Beijing, and both flags were subsequently restored to the jacket in the film’s official release.

A man tries on a bomber jacket at a stall at the weekend Military Cultural Industries Market at the Sanchong Air Force Military Kindred Village No. 1 in New Taipei City yesterday. Photo: CNA