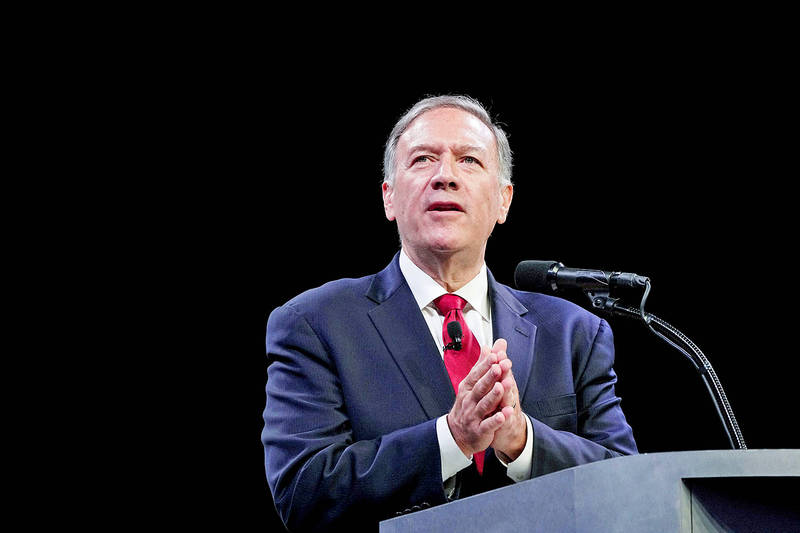 The US should officially recognize Taiwan as a free, independent nation and establish official diplomatic ties, former US secretary of state Mike Pompeo told an event at the Hudson Institute in Washington on Friday.

Every US president since Harry Truman has considered Taiwan’s existence to be of utmost importance to US national security, Pompeo said.

Taiwan is a principal US partner in technology and economic matters, and if China were to capture Taiwan’s semiconductor supply chain, it would severely hamper the US economy, Pompeo said.

Should China occupy Taiwan, it would severely weaken US influence in the Indo-Pacific region and its surrounding areas, Pompeo said.

An occupation could be a breakthrough in controlling the first island chain and increase China’s influence throughout the region, including a force projection that could threaten Guam, Hawaii, Japan and Australia, Pompeo said.

The US must expand the Quadrilateral Security Dialogue — known as the Quad — between Australia, India, Japan and the US, and also include South Korea, the UK and France, Pompeo said,

The AUKUS security pact between Australia, the UK and the US should be incorporated into the Quad format, he added.

The US must help build three “lighthouses for liberty,” Pompeo said, referring to Taiwan, Israel and Ukraine.

With Putin in power, no neighbor of Russia is safe, he added.

Pompeo decried the Russian invasion of Ukraine as a planned genocide, similar to the Holodomor, a famine orchestrated by Soviet leader Joseph Stalin that in 1932 and 1933 killed millions of Ukrainians.

If Russia were to consolidate domination over the eastern Ukrainian Donbas region and the country’s access to the Black Sea, Putin would next seek control of energy resources in other countries that were once part of the Soviet Union, Pompeo said.

“We must aid Ukraine, for to do so in part is our first duty to America and to Americans,” he said, adding that by empowering Ukraine, the US is demonstrating to China the cost of invading Taiwan.