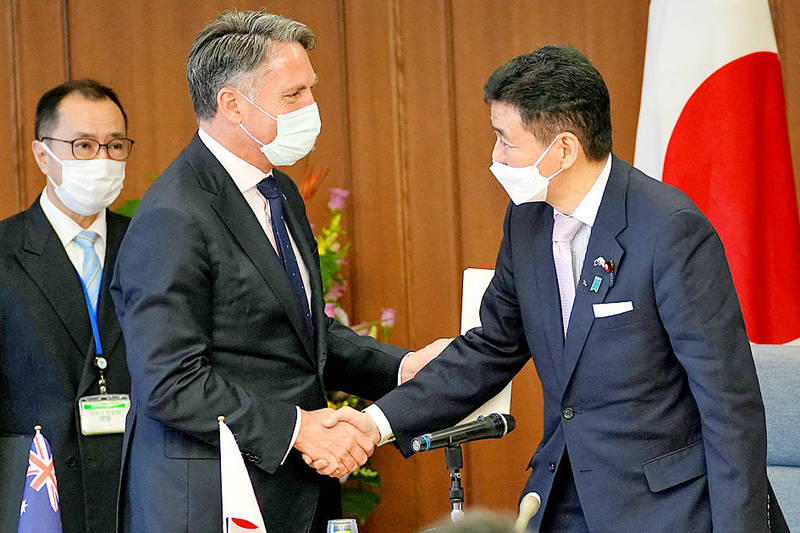 / Reuters and AP, WASHINGTON and TOKYO

The US on Tuesday backed Taiwan’s assertion that the Taiwan Strait is an international waterway, a further rebuff to Beijing’s claim to exercise sovereignty over the strategic passage.

On Monday, the Chinese Ministry of Foreign Affairs said the country “has sovereignty, sovereign rights and jurisdiction over the Taiwan Strait,” and called it “a false claim when certain countries call the Taiwan Strait ‘international waters.’”

The world has “an abiding interest in peace and stability in the Taiwan Strait, and we consider this central to the security and prosperity of the broader Indo-Pacific region,” he added.

Price reiterated US concerns about China’s “aggressive rhetoric and coercive activity regarding Taiwan,” and said the US “would continue to fly, sail and operate wherever international law allows, and that includes transiting through the Taiwan Strait.”

“China’s ambition to swallow up Taiwan has never stopped or been concealed,” he told reporters. “The Taiwan Strait is a maritime area for free international navigation.”

China’s Taiwan Affairs Office said that Taipei was “cooperating with external forces to hype up the issue.”

In related news, Japan and Australia’s defense ministers yesterday vowed to step up their ties to support democratic values in the Indo-Pacific region, and agreed to work more closely with Southeast Asia and the Pacific island nations where China is seeking to expand its influence.

Australian Minister for Defence Richard Marles and his Japanese counterpart, Nobuo Kishi, said that regionwide cooperation is necessary to maintain and strengthen the rules-based order in the Indo-Pacific region, where there is growing fear that Russia’s invasion of Ukraine might embolden China to increase its assertiveness.

“It is clear that our region faces the most complex set of strategic circumstances we have had since the end of World War II and what the region does matters,” Marles told a joint news conference in Tokyo after holding talks with Kishi.

“Only by working together can we uphold the rules-based international order, contribute to an effective balance of military power and ensure our region remains stable, peaceful and prosperous,” Marles added.

Kishi said the two ministers shared their concerns about the impact of Russia’s invasion of Ukraine.

He said they remain strongly opposed to any unilateral change of the “status quo” in the East and South China seas, and reaffirmed their commitment to a mutual vision of “a free and open” international order of the seas.