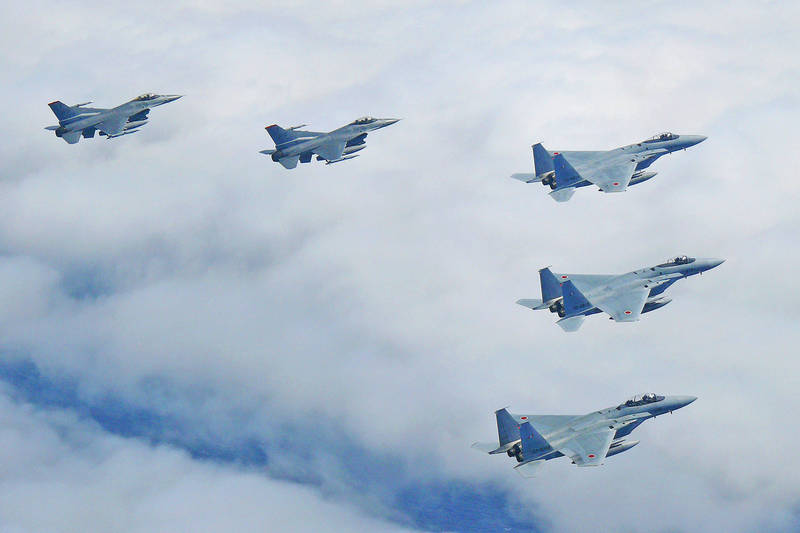 Japanese and US fighter jets fly in formation over the Sea of Japan yesterday. Photo: AP

‘VERY RARE’ MENTION: The government said it welcomes any positive measure that contributes to heightening the importance of peace and stability across the Strait

A rare mention of Taiwan as a footnote in the official Japanese policy guidelines could signal further warming of Taiwan-Japan ties, as the news came on top of reports that Japan is considering dispatching Self-Defense Force officers to Taiwan.

A Japanese newspaper reported that Japan’s Cabinet yesterday ratified the Basic Policies for Economic and Fiscal Management and Reform, which includes a footnote on the importance of peace and stability in the Taiwan Strait.

The Japanese-language Asahi Shimbun reported that the Liberal Democratic Party Congress had been divided on whether the guidelines should include a clear statement to “deepen collaboration with Taiwan,” but later decided to reference the statement following a leaders’ summit between US President Joe Biden and then-Japanese prime minister Yoshihide Suga in April last year, as Japan has no formal diplomatic ties with Taiwan.

The congress on Monday approved adding the summit’s wording — that Japan “underscores the importance of peace and stability across the Taiwan Strait and encourages the peaceful resolution of cross-strait issues” — as a footnote in the guidelines.

Minoru Kihara, a member of the Liberal Democratic Party’s Policy Affairs Research Council, said that the mention of Taiwan in the guidelines, even as a footnote, was “very rare.”

Party members’ demand that the mention of Taiwan be moved from the footnote to the body of the guidelines would be handled by council chairwoman Sanae Takaichi, Kihara said.

In Taipei, Ministry of Foreign Affairs spokeswoman Joanne Ou （歐江安） yesterday said that Taiwan welcomes any positive measure that contributes to heightening the importance of peace and stability across the Taiwan Strait.

Taiwan would continue to collaborate and deepen relations with like-minded partners such as Japan to jointly defend the common values of democracy and freedom, Ou said.

The guidelines ratified yesterday also state that Japan would drastically increase defense spending “within the next five years.”

Neither the five-year period nor the reference to Taiwan had figured in a draft version of the document last week.

By contrast, last year’s version of the guidelines said only that Japan would significantly increase defense spending as necessary.

The document — which includes issues ranging from energy security to Japanese Prime Minister Fumio Kishida’s “new capitalism” — does not assign an amount to Japan’s commitment to “drastically strengthen” defense spending.