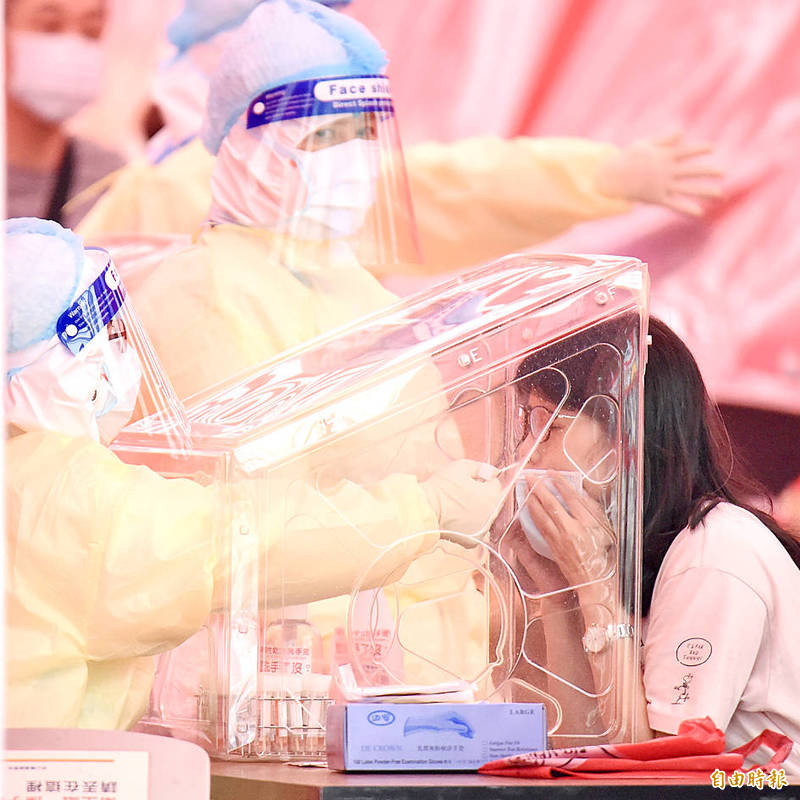 The policy of using a positive COVID-19 rapid test result for diagnosis could be expanded to the public starting tomorrow, the Central Epidemic Command Center （CECC） said yesterday, as it reported 82,363 new domestic cases.

Minister of Health and Welfare Chen Shih-chung （陳時中）, who heads the center, last week announced that the policy of recognizing a positive COVID-19 rapid test result, after being assessed by a doctor, as the main tool for diagnosis would eventually be expanded to include everyone and could take effect this week.

The center has been discussing with hospitals the details of transforming their polymerase chain reaction （PCR） testing stations into “three-in-one” stations that assess people’s rapid tests and prescribe drugs if needed, while offering some PCR testing capacity, Chen said.

The time it takes for doctors to confirm a person’s test and prescribe drugs would take longer than to perform a PCR nasal swab, so patient flow and related details are still being discussed, but if the preparations are completed, the center could announce expanding the policy to the public tomorrow, he said.

The policy would accelerate the process of COVID-19 diagnosis and enable people to start taking drugs earlier, Chen said, adding that 7,431 courses of antivirals were prescribed on Monday, including 5,680 courses of Paxlovid and 1,571 courses of molnupiravir.

CDC Deputy Director-General Chuang Jen-hsiang （莊人祥）, who is the CECC’s spokesman, said the peak of the local outbreak is expected to fall between late this month and early next month, but as eliminating the virus is impossible, case numbers could still fluctuate.

Asked why the daily case count has not reached the peak of more than 100,000 estimated by the center, Chen said the trend has been relatively steady in the past few days, but he believes the numbers would increase in the next week.

He said although many of the COVID-19 restrictions have been relaxed, people are taking preventive measures on their own.

Passenger flow on public transport dropped 60 percent during the level 3 COVID-19 alert last year, and it has declined 45 percent this month, Chuang said.

Sixteen people had been unvaccinated, while 26, or 62 percent, did not get a booster shot.

He said the deaths include a man in his 20s who had a nervous system disease and did not get vaccinated.

Another was a 10-year-old who died of acute encephalitis and multiple organ failure.

The nation’s first, second and booster dose vaccination rates were 86.94 percent, 81.41 percent and 64.41 percent respectively as of Monday, Chen said.