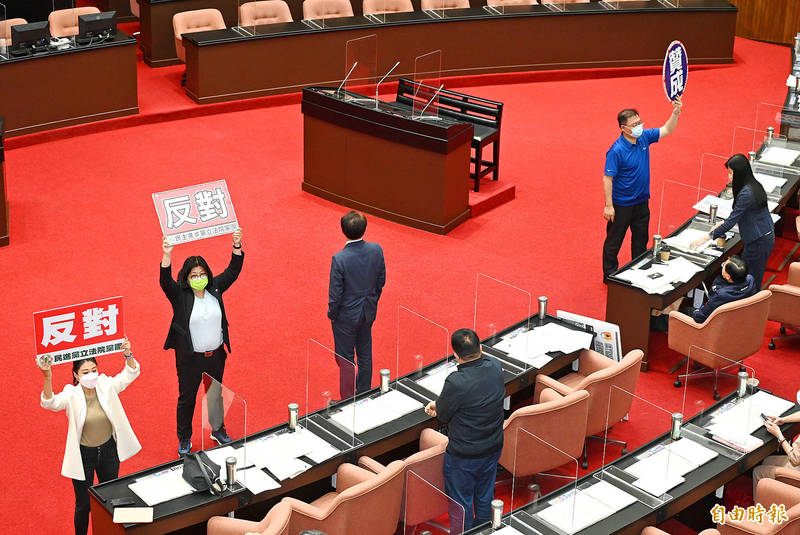 Lawmakers signal their parties’ stances on the third reading of draft amendments to the National Security Act at the Legislative Yuan in Taipei yesterday. Photo: Tien Yu-hua, Taipei Times

NATIONAL SECURITY: Aiding foreign or hostile forces in stealing, copying or leaking business secrets involving core technologies is punishable by up to 12 years in prison

The Legislative Yuan yesterday passed amendments setting penalties for economic espionage of up to 12 years in prison or a NT$100 million （US$3.37 million） fine, and banning employees in key industries from traveling to China without permission, as it seeks to stifle theft of key technologies.

As an advanced country capable of protecting business secrets, Taiwan should be included in mechanisms such as the US-led Indo-Pacific Economic Framework, Chao added.

Under the amendments, offenders could face five to 12 years in prison or a fine of NT$5 million to NT$100 million.

Meanwhile, the theft of confidential business information would be punishable by a fine of two to 10 times the resulting economic gains, the law states, noting that such profits could be huge.

If current or retired military personnel, civil servants or public employees are convicted of such a crime, they would forfeit the right to apply for pensions and would be compelled to return amounts already collected, the amendments say.

Prosecutors could issue an investigation confidentiality protective order, a breach of which could result in up to five years in prison or a fine of NT$1 million, according to the amendments.

A court could also establish either a dedicated tribunal or a dedicated division to handle cases under the law.

Also passed yesterday were amendments to the Act Governing Relations Between the People of the Taiwan Area and the Mainland Area （兩岸人民關係條例） forbidding Taiwanese from allowing Chinese-funded businesses to use their names to invest in Taiwan. Offenders could face fines of up to NT$2.5 million.

Chinese profitseeking enterprises that establish their own offices in Taiwan without approval are prohibited from conducting business in the country, while anyone who allows them to use their name to operate in Taiwan could face up to three years in prison or a fine of NT$15 million.

If people who engage in business involving core technologies travel to China without government approval, they could face fines of up to NT$10 million, according to the amendments.

New Power Party Legislator Chiu Hsien-chih （邱顯智） agreed with the importance of defining “core” technologies and said that establishing a dedicated tribunal might be contradictory to the principle that cases should not be assigned to specific judges.