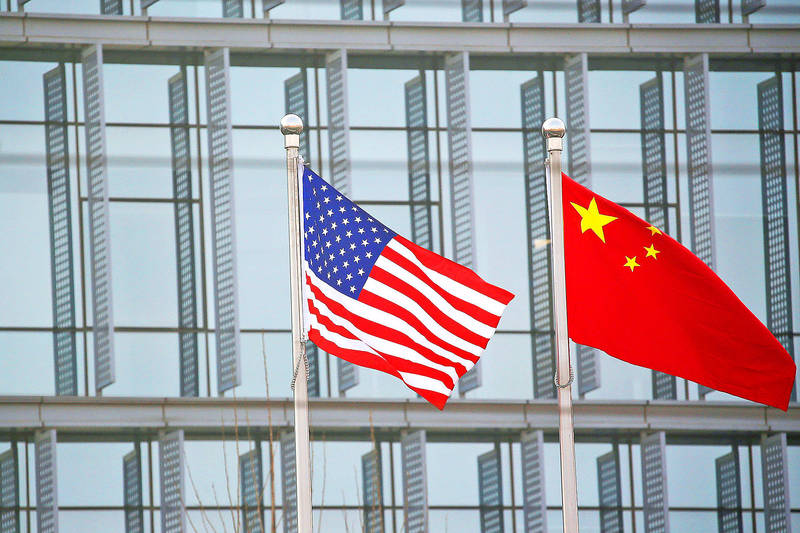 The flags of the US and China fly outside the building of a US company in Beijing on Jan. 21 last year. Photo: Reuters

ASEAN BATTLEGROUND: Japan and Australia could be drawn into Pacific tensions as China sets its sights on the Diaoyutai Islands and further beyond the first island chain

Tensions between China and the US in the Indo-Pacific region are expected to intensify, the National Security Bureau and Ministry of Foreign Affairs said, recommending that Taiwan continue to emphasize its shared values and interests to encourage resistance to Chinese aggression.

US commitments in the Indo-Pacific region are expected to continue unabated despite the war in Ukraine, as Beijing takes advantage of the conflict to expand its influence in the region, the agencies said in reports delivered to the legislature’s Foreign Affairs and National Defense Committee on Sunday, ahead of a hearing yesterday on regional developments and trends.

Although Russia’s invasion of Ukraine is occurring outside Asia, it has made the world more concerned about Taiwan and cross-strait tensions, the ministry said, urging the nation to make use of goodwill to strengthen its partnerships and self-defense capabilities.

Through bilateral and multilateral security frameworks such as the Quadrilateral Security Dialogue （Quad） and an alliance with Australia and the UK （AUKUS）, the US has demonstrated its resolve to maintain regional stability in tandem with its democratic allies, the bureau said.

Meanwhile, China is planning to take advantage of COVID-19 economic recovery needs and employ cognitive warfare in an attempt to break US influence in some countries, it said, adding that the rivalry between the two powers would intensify.

ASEAN has already become a battleground, as US President Joe Biden seeks to emphasize his country’s relationship with the union, the ministry said.

At the same time, China is setting its sights on the Pacific, raising alarm that it might station troops beyond the second island chain after signing a security agreement with the Solomon Islands, it added.

As the US-China rivalry solidifies, Taiwan “has become one of the key counterbalancing factors for the democratic camp in countering authoritarian influence,” the ministry said.

Taiwan should continue to highlight its convergence of interests with like-minded nations, and align itself with the strategic goals of the Quad and AUKUS to strengthen the leverage enjoyed by the US, Japan, Australia and other key parties for the sake of regional peace, it said.

Meanwhile, at the committee meeting yesterday, bureau Director-General Chen Ming-tong （陳明通） was asked about Japan’s role in scenarios outlined in the reports.

Chen told lawmakers that Japan would be an “active player, not a spectator.”

Chen said that China’s idea of “complete” unification extends beyond Taiwan to include the Diaoyutai Islands （釣魚台）, known as the Senkaku Islands in Japan. The islands are claimed by Taiwan, China and Japan.

If China militarizes these islands, as it has done with others in the South China Sea, it would pose a direct threat to Japan, he said.

This would be in addition to separate island disputes with an aggressive Russia and two other hostile nuclear-armed powers, China and North Korea, Chen said, adding that this would place Japan in an increasingly perilous position, forcing it to play a more prominent role in Pacific security affairs.