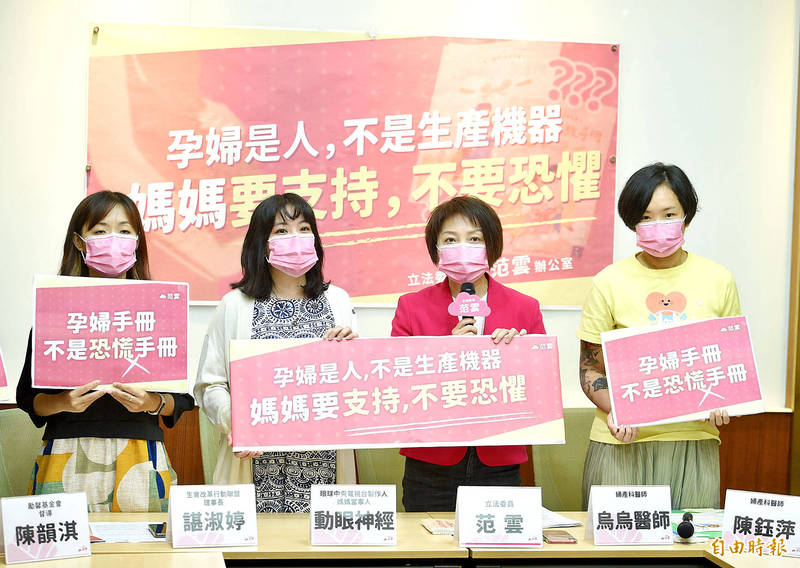 ‘PANIC MANUALS’: Ministry booklets perpetuate false stereotypes, cause mothers to blame themselves and are not science-based, a legislator and advocates said

Advocates yesterday called on the Ministry of Health and Welfare to revise its guidance for pregnant women, saying material it released reads like “modern versions of social taboos” disguised as scientific advice.

They should provide “accurate information, not false stereotypes and stress,” Fan said.

She also called for more complete information about the stages before and after pregnancy, such as birthing options, roles for partners and preparation for parenthood.

The guidebooks should also include representation of diverse types of pregnancies, including miscarriage, premature birth and mothers of different ages, Fan added.

An obstetrician and gynecologist who goes by the name Wu Wu （烏烏） said many of her patients call the handbooks “panic manuals.”

After reading them through, Wu Wu said they give the impression that women are “baby machines,” restricting them from many of their regular activities.

The recommendations are often confusing and contradictory, and lack a scientific basis, she added.

For example, she cited guidance against soaking in hot springs and dyeing hair, even though Japan’s law governing hot springs was revised long ago to say that they are safe for expectant mothers, while the American College of Obstetricians and Gynecologists specifies that hair dyeing is safe if the scalp is avoided.

The handbook also advises against lifting weights or heavy objects, but also says to maintain strength for the birth, she added.

In fact, weight training is beneficial during pregnancy, as long as correct posture is maintained, Wu Wu said.

She also criticized the handbooks’ guidance on premature birth, which studies have shown is prevalent and difficult to predict.

The handbooks instead list causes such as emotional agitation, common colds, overwork and even being unmarried, she said.

These not only perpetuate false stereotypes, but also cause mothers to blame themselves, Wu Wu said.

Most of the health advice in the section about postpartum care, apart from breastfeeding, is limited to how to regain one’s figure, she said, adding that it does not even mention urine leakage, back pain or postpartum carpal tunnel.

Birth Empowerment Alliance of Taiwan chairwoman Chen Shu-ting （諶淑婷） said the handbooks are only helpful during pregnancy, but even at that they only focus on checkups and provide few details on what to expect during labor or delivery.

There is even less information for partners, or what to do about newborn care and psychological support, she added.

She suggested that revisions include more information about the postpartum stage, including newborn care, how to tell if a newborn is sick and how to hold a child to reduce strain on a mother’s hands.

Garden of Hope Foundation supervisor Chen Yun-chi （陳韻淇） said that since the foundation began caring for underage mothers in 2000, it has been maligned by some.

Counselors have found inadequate sex education and a lack of emotional support to be behind most underage pregnancies, she said, recommending that the government consider whether they are reaching the right people with their measures, and ensure that expectant mothers receive care, whether their pregnancy was planned or not.

Tsai Wei-yi （蔡維誼）, director of the Maternal and Child Health Division at the Health Promotion Administration, said that the handbooks are continually revised.

Health guidance — including those about hot springs and hair dye — would be discussed at a revision meeting later this year, Tsai said, adding that input would be sought from experts and readers to ensure that the content better reflects mothers’ experiences and includes guidance for their partners.