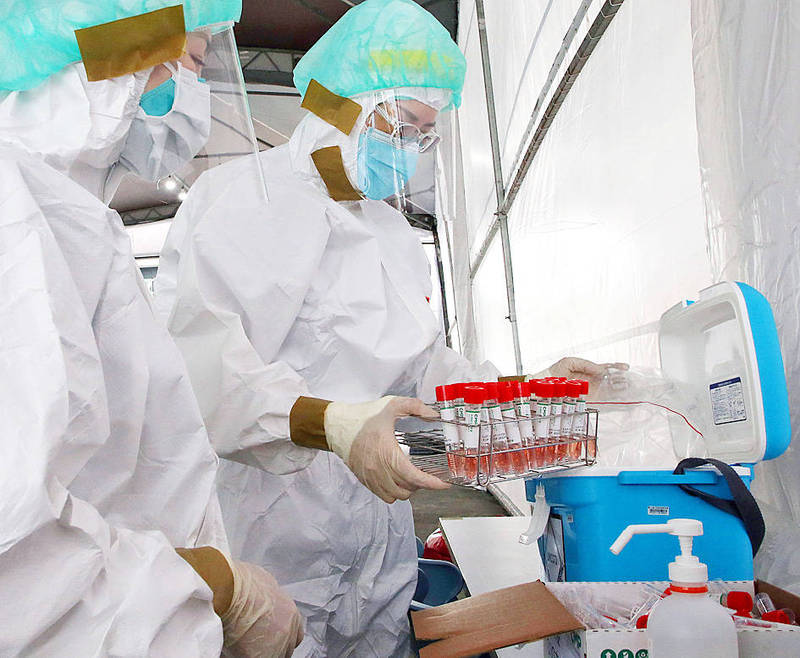 Minister of Health and Welfare Chen Shih-chung （陳時中）, who heads the center, said that the CECC has invited local clinics to help perform PCR tests.

More than 300 clinics affiliated with the Taiwan Medical Association （TMA） and the Taiwan Otolaryngology Society want to help, Chen said.

A list of clinics that meet the CECC’s criteria would be posted on the center’s Web site, he said, adding that approved clinics would receive personal protective equipment and rapid COVID-19 test kits for their staff.

The people who died were aged 70 or older, unvaccinated and had underlying health conditions, Lo said, adding that two were given molnupiravir, an oral antiviral to prevent their illnesses from becoming more severe.

As more than half of the deaths were unvaccinated and nearly 70 percent not fully vaccinated, Lo urged older people to get vaccinated to prevent severe illness or death.

Another 20,000 courses of the drug would be delivered on Friday to 57 “core pharmacies” — those designated by the Federation of Taiwan Pharmacists’ Associations as having more storage space so that they can serve as community dispensaries, he said.

Other local pharmacies can pick up and deliver the drug to people isolating at home, he added.

With a delivery of 200,000 courses of Paxlovid expected to arrive on Saturday, the CECC would still have about 280,000 courses remaining after the weekend, Lo said.

Paxlovid is more effective when prescribed within five days of the onset of COVID-19 symptoms, so it is better if all doctors can prescribe it for their patients.

Asked when a person who has had direct contact with a confirmed case should test themselves, Chen said he does not recommend that they conduct a rapid COVID-19 test on the day of contact.

The Omicron variant of SARS-CoV-2 has an incubation period of about three days, Lo said, suggesting that people perform the test at least one day after contact, but before three days.

The incubation period can be a little longer for some people, so people could perform another test after about seven to 10 days after exposure if they are worried, he added.

If they test negative on the first test, they should test again if they experience symptoms over several days, Chen said.

《TAIPEI TIMES》 President thanks parents for…