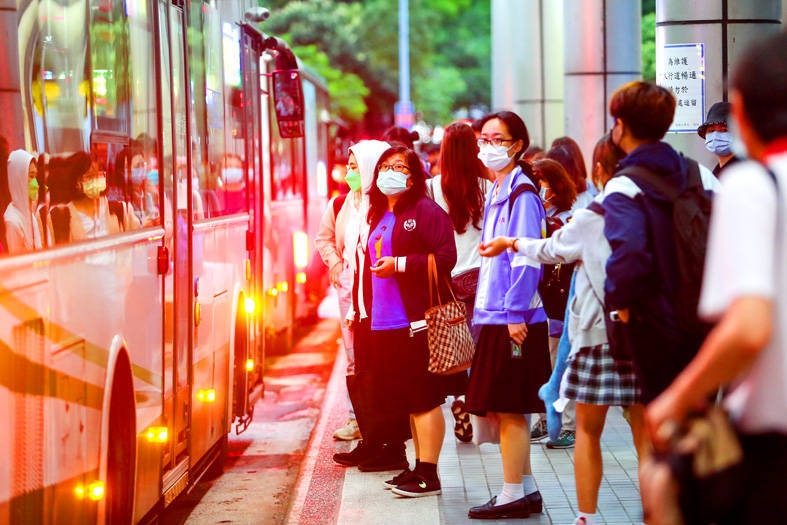 MAKING A PLAN: An extra 3,500 highway and city bus services are to run to and from TRA stations, while tour buses are also to be operating as ‘quasi trains’

The Taiwan Railways Administration （TRA） yesterday confirmed that it is to offer 18 commuter train services today, even as most of its drivers go on strike.

Six of the commuter trains would be express services, while 12 would be standard, the TRA said.

The earliest available train is the No. 3007 express train from Changhua to Taitung departing at 6:08am, while the last is the No. 1253 standard train from Keelung to Hsinchu at 7:09pm, the TRA said.

The TRA said that detailed information about today’s train timetable can be found on its Web site.

Minister of Transportation and Communications Wang Kwo-tsai （王國材） again apologized for the inconvenience caused by the strike organized by members of the Taiwan Railway Labor Union （TRLU）.

Speaking at a highway reopening in southern Taiwan, Wang said that while the majority of drivers were to take the day off on International Workers’ Day, there would at least be some services available.

Wang thanked the drivers who were willing to work today, but said that he also respected the other drivers’ right to take the day off.

The strike, announced on April 16, is in protest against the Ministry of Transportation and Communications’ plan to corporatize the TRA.

In related news, the Directorate-General of Highways （DGH） on Friday said that it had made arrangements to provide extra bus services in anticipation of the strike.

An additional 3,500 highway and city bus services, representing a 21.5 percent increase, are to run on existing routes to and from TRA stations across Taiwan today, the DGH said in a statement.

In addition, tour buses which the transportation ministry has dubbed “quasi trains,” are to offer 716 services on 12 existing routes that normally have long intervals between stops, it said.

Separately on Friday, the Pingtung County Government said people unable to travel on the South Link Line, which connects the county to Taitung, and the Kaoping line from Kaohsiung to Pingtung can take the “quasi trains” instead.

The DGH advised people to check for bus schedule updates on the iBus information system Web site, or the iBus mobile app.