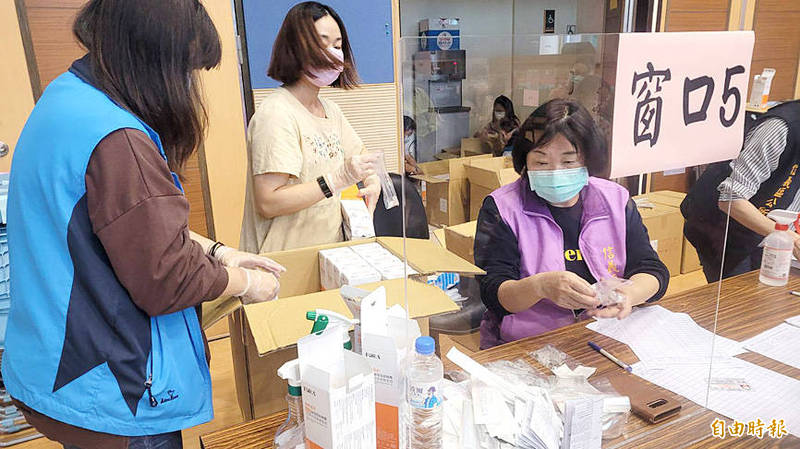 VARIANT NO. 23: A case in New Taipei City’s Sanchong District showed in genome sequencing an infection with the BA.2 subvariant of Omicron, the CECC said

A wide-scale COVID-19 screening program would be conducted in Keelung, offering government-funded at-home rapid test kits to 360,000 local residents in light of a cluster that has expanded to 68 cases, Minister of Health and Welfare Chen Shih-chung （陳時中） said yesterday.

The virus seems to have been spreading in communities in Keelung for quite some time and it would be difficult to find undetected cases at testing stations, Chen said during a visit to Keelung.

The details of the screening program, including the method to distribute and collect the kits, are still being discussed, said Chen, who heads the Central Epidemic Command Center （CECC）.

There are 19 local transmission chains with unknown infection sources, it said, adding that the cluster in Keelung is the most concerning, as it involves several businesses and a school.

It does not seem to be coming under control, so it must be closely monitored, he said.

A cluster involving workers at a chemical plant in Kaohsiung seems to be under control, as no new cases have been found in the past three days other than people who were already isolating at home, including one case confirmed yesterday — a family member of a previous case, Chen said.

Two local cases yesterday were linked to a cluster of infections in Taitung, he said.

The Taitung cluster has expanded to 11 cases, Chen said.

Six local cases were yesterday linked to a cluster involving workers at a technology firm in New Taipei City’s Shulin District （樹林）, with four among them — three workers and a family member of a previous case — testing positive while isolating, while the other two workers had symptoms when under self-health management, he said.

The Shulin cluster has expanded to 29 cases, he said.

Genome sequencing showed that three cases in the Shulin cluster were infected with a new strain of the Omicron BA.2.3 subvariant of SARS-CoV-2, Chen said.

They were: Two family members, two people at a clinic that previous cases had visited, a student at a cram school attended by a previous case and a person who visited the same place as a previous case, Chen said.

Twelve of yesterday’s new cases are linked to a cluster involving workers at a power plant construction site in Taoyuan and its dormitories in Hsinchu County, he said, adding that one of the cases is concerning, as he is a worker at a separate, larger construction site, so expanded testing is being conducted.

The Taoyuan cluster has expanded to 78 cases, he said.

A new case is linked to a cluster involving a salesperson in New Taipei City’s Sanchong District （三重）, with genome sequencing showing that the woman is infected with the BA.2 Omicron subvariant, the 23rd Omicron strain detected in Taiwan, Chen said.

Another case is a family member of a case in a Taipei cluster linked to a care worker and her employer, he said.