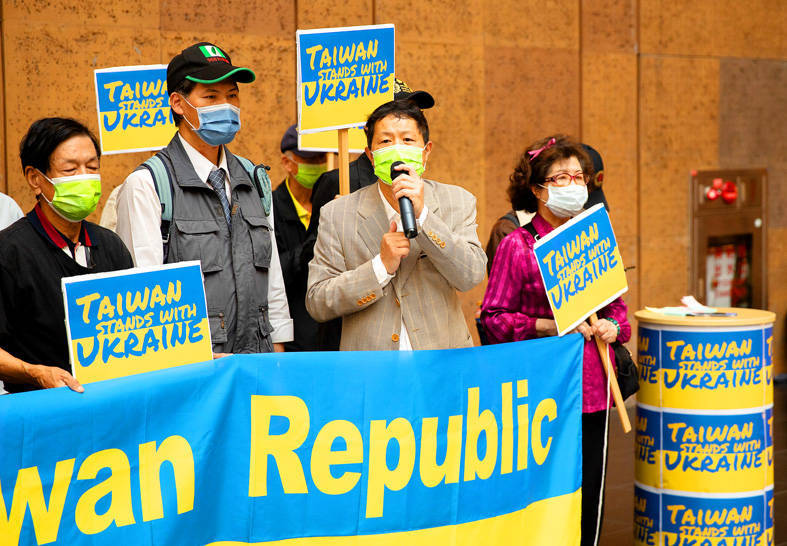 Taiwan Republic Office director Chilly Chen, second right, and advocates from other pro-Taiwan groups hold a news conference at Taipei Railway Station yesterday to announce the establishment of a “Lennon wall” for people to post messages of support for Ukrainians. Photo: CNA

‘TAKING UP ARMS’: Taiwanese and Ukrainians have the determination to safeguard their homelands, Taiwan Independence Party Chairman Peter Ku said

Pro-Taiwan groups yesterday set up a “Lennon wall” at Taipei Railway Station so that people can post messages of friendship and support for Ukrainians. They also said a majority of Taiwanese are willing to take up arms against China to defend their homeland.

The advocates said they wish to see people from all walks of life, including foreigners, tourists and migrant workers, leave messages in their own language on the Lennon wall in the station’s main hall across from the ticket booths.

They set up the “Taiwan Republic Supports Ukraine” wall to clearly differentiate Taiwan from China and the Republic of China （ROC）, Chen said.

“Neither the ROC nor the People’s Republic of China can represent the people of Taiwan, who aspire to build their own independent sovereign nation,” he said.

Taiwanese sympathize with and have genuine concern for war-torn Ukraine, and want to help the country, as they see news reports of bombings and the devastation wrought by the Russian military, Chen said.

“The situation has reminded us of the constant threat and military aggression from China. Taiwanese naturally empathize with Ukrainians in their courageous fight against invasion by a hostile, belligerent neighbor,” he added.

“Yet we see pro-China politicians from the pan-blue camp publicly calling for appeasing China. They even call on Taiwanese to surrender [in the event of a Chinese invasion] and to give up their sovereignty to be ruled by Beijing. Most people are disgusted by such remarks,” Chen said.

Ku said Taiwanese and Ukrainians have the determination to defend their homelands, and to preserve the shared values of liberty, human rights and a democratic society governed by the rule of law.

“Recent polls show that more and more Taiwanese have expressed a willingness take up arms to fight in defense of the nation if China attempted to invade Taiwan,” Ku said.

He said he agrees with a proposal to establish a “Taiwan territorial defense force” for each region, city and county with “decentralized” armed units, which would combine reservists, local militia and civilians regularly trained against an invasion by China, be it airborne or amphibious.

Ku said he served in the military for two years as a conscript, and received training on the use of assault rifles, mortars and portable missiles.

“The majority of men in Taiwan have such military training... We will certainly take up arms to fight, because we do not want to live under a communist regime,” he said.

“We will defend our homeland to safeguard our democratic nation and vibrant civil society, and to be able to enjoy freedom and have the right to vote in free elections,” he added.

“Taiwan’s regular troops and local units from a ‘territorial defense force’ could defeat a Chinese military invasion by combining asymmetric warfare with the strong will of people to defend Taiwan,” Ku said.

“We already have indigenous long-range missile defense systems,” he said. “We need more portable and mobile weapons systems — such as the Javelin and Stinger missiles that have been used to great effect by Ukrainian troops — to shoot down Chinese aircraft, assault helicopters and transport airplanes, and sink warships should they try cross the Taiwan Strait for an invasion.”