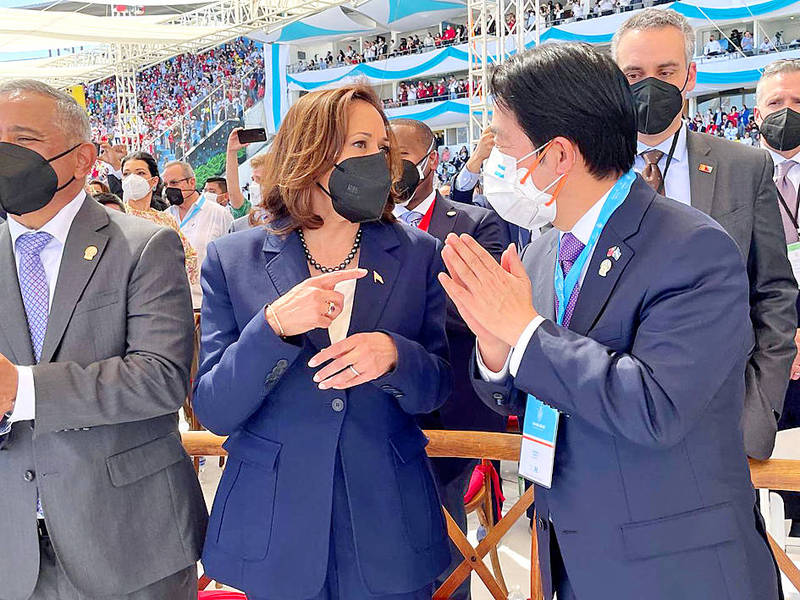 INFORMAL CONVERSATION: The Taiwanese envoy to President Xiomara Castro’s inauguration said he thanked his US counterpart for her country’s support of Taiwan

As the last government envoy introduced at the packed sports stadium where the ceremony was held, Harris greeted the international leaders present, including Lai, who was sitting in the front row near Costa Rican President Carlos Alvarado Quesada and King Felipe VI of Spain.

Lai and Harris spoke briefly, the first time the vice presidents have interacted at a public event since taking office in 2020 and last year respectively.

Commenting on their impromptu conversation, which the international media characterized as “highly symbolic,” Harris told reporters after the inauguration that she and Lai talked about “a common interest in this part of the region.”

Their conversation also touched on “Taiwan’s interest in our root causes strategy,” Harris said, referring to the US’ efforts to curb migration.

Reuters described the encounter as “likely to add to Beijing’s tensions with Washington.”

Speaking at a news conference with Taiwanese reporters, Lai declined to reveal what he and Harris discussed, saying only that he thanked the US vice president for her country’s support of Taiwan.

Lai also posted a photograph on Facebook of him among a group of people including King Felipe.

Lai is leading a delegation to Honduras to attend Castro’s inauguration and meet with officials from its new government.

He was yesterday to return home via San Francisco.

The Presidential Office said that Lai invited Castro to visit Taiwan during a bilateral meeting held after she was sworn in.

During the meeting, Lai extended the invitation to Castro on behalf of President Tsai Ing-wen （蔡英文）, and expressed Taiwan’s continued support for the Honduran government as it pushes for economic reform and fights against corruption, the office said.

As Tsai and Castro are the first female presidents of their respective countries, their meeting would be a testament to global efforts to promote women’s empowerment, the office quoted Lai as saying.

Lai also proposed that Taiwan, Honduras and the US collaborate on “helping Honduras solve various problems,” the office said, without providing specifics.