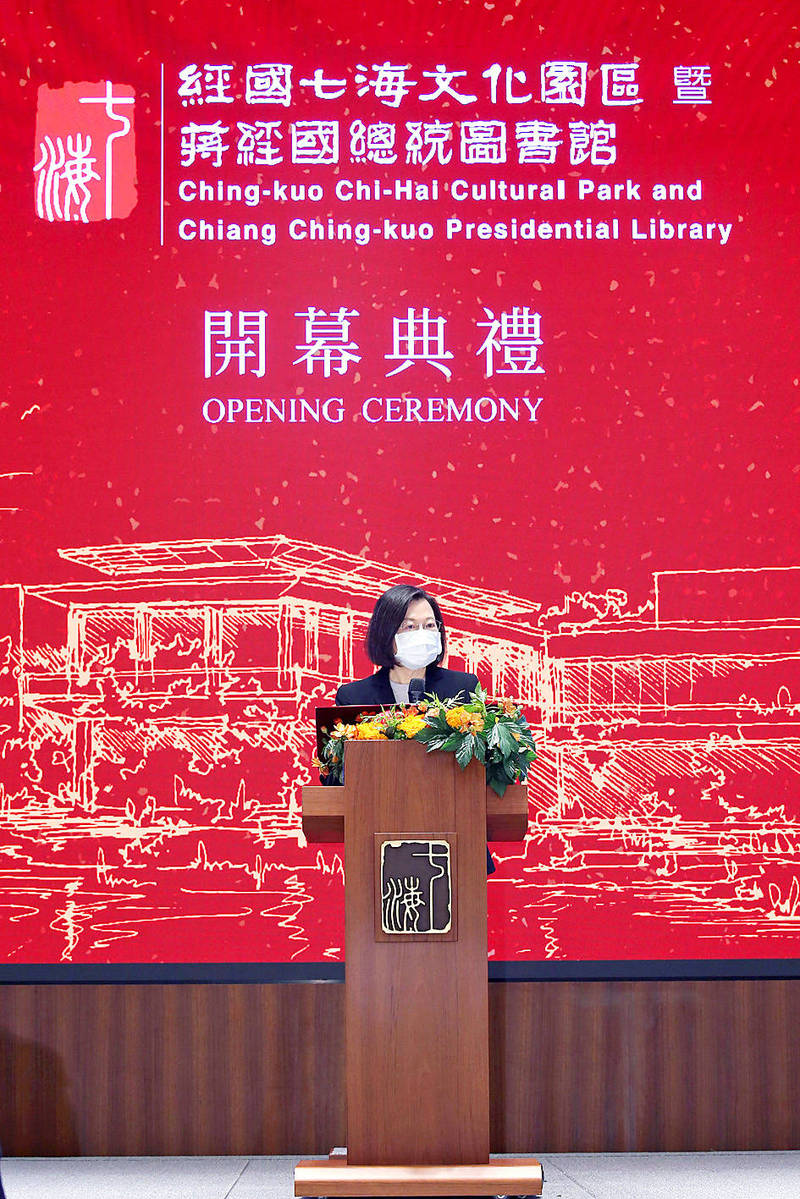 FAIR JUDGEMENT: Chiang Ching-kuo’s defense of Taiwan unites many Taiwanese, and his presidential library would help people understand the nation’s past, Tsai said

Tsai’s remarks came a day after the Transitional Justice Commission said that the Ching-kuo Chi-hai Cultural Park （經國七海文化園區） in Taipei’s Dazhi （大直） area glorified authoritarianism and did not address Chiang’s role in the White Terror era.

“Chiang’s staunch defense of Taiwan is a stance that unites a large part of Taiwanese society, especially as Beijing applies ever greater pressure against the country,” Tsai said yesterday, adding that the debate over history helps keep the nation from repeating the mistakes of the past.

That the foundation established the park in Chiang’s memory and then invited her to speak at the opening showed that it respects the presidency, she said, before praising it for having an open-mind about Chiang’s legacy.

The library is to provide the knowledge necessary for passing fair judgement on Chiang, which would help heal Taiwan’s social divide, she said.

Chiang was president during a crucial period in Taiwan’s history that saw the country rise as an Asian economic powerhouse and the transformation of society, Tsai said.

“Democracy was not a gift. We hope the library will assist visitors in examining the past to understand Taiwan’s development into a democratic exemplar of the Chinese-speaking world,” she said.

Chiang faced cross-strait and diplomatic challenges which parallels those of today, Tsai said before quoting Chiang as saying that the Republic of China must survive by being the world’s “spiritual fortress” against communism.

Taiwan Society chairman Lee Chuan-hsin （李川信） said that he respected Tsai’s handling of the controversy over the park, as the head of state must take the high ground to facilitate social peace.

However, as the commission pointed out the park’s authoritarian symbolism, “it would be better if Tsai could elaborate on Chiang’s role during the authoritarian regime and clarify the controversy regarding the park’s legitimacy,” Lee said.

Lee was referring to Article 5 of the Act on Promoting Transitional Justice （促進轉型正義條例）, which stipulates that “symbols appearing in public buildings or places that commemorate or express nostalgia for authoritarian rulers shall be removed, renamed or dealt with in some other way.”

While Chang’s lifting of martial law aided Taiwan’s democratic development, he did so in response to the nation’s democracy movement and prevailing trends abroad, Lee said.

There is little doubt that Chiang, as head of the country’s security apparatus, was responsible for human rights abuses throughout the authoritarian period, he added.