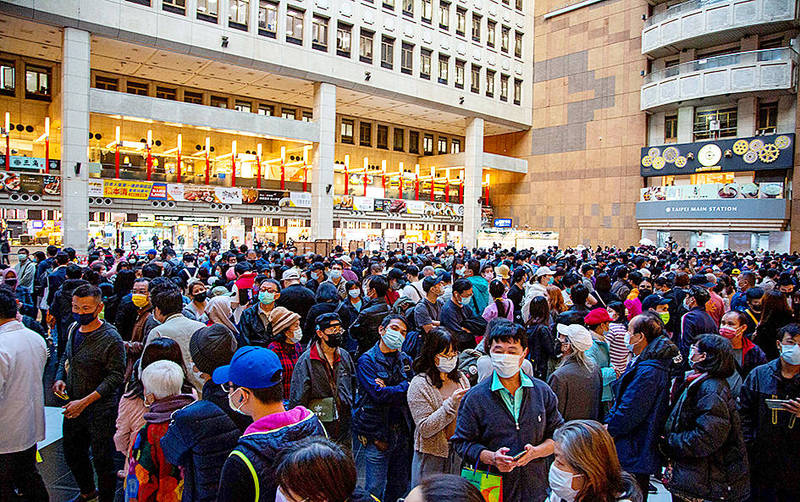 Thousands of people lines up for vaccination in the Taipei Train Station hall yesterday. Photo courtesy of the Central Epidemic Command Center

THREAT REMAINS: With cases rising in many parts of the world, the minister urged the public to continue complying with the disease prevention regulations

Chen, who heads the CECC, said no local infections or deaths were reported, but 21 imported cases were confirmed yesterday.

The imported cases are eight men and 13 women who arrived from Belize, Cambodia, Indonesia, the Philippines, Singapore, Vietnam and the US, Chen said.

The highest number of daily imported infections last year was 25 cases on March 23, he said.

The five sailors arrived from Singapore and tested negative upon arrival, as well as upon ending quarantine, but they tested positive in self-paid tests on Monday after completing self-health management, Lo said.

However, they had low viral loads and had developed antibodies against COVID-19, while four of them tested negative in a second test yesterday, so they were likely previous infections that pose a low risk to the local community, he said.

As no local infections have been reported for 33 consecutive days, which exceeds two 14-day incubation periods of COVID-19, Taiwan can be considered to have achieved “COVID zero” status, Chen said, adding that this was the result of everyone’s disease prevention efforts.

However, cases are rising in many parts of the world, so Taiwan is expected to report more imported cases this month, he said, urging the public to continue cooperating with the CECC and complying with disease prevention regulations.

Asked to comment on Taiwan People’s Party Legislator Lai Hsiang-ling’s （賴香伶） remark yesterday that there are still more than 5 million people who have not received a dose of COVID-19 vaccine, Chen said there are about 2 million children younger than 12 years old who cannot get vaccinated, while there are about another 2 million currently overseas.

After the CECC on Monday reported that 34,000 doses of the Moderna vaccine were due to expire yesterday, Chen said that about 15,000 doses still needed to be administered yesterday, but with various gifts and gift certificates being offered to encourage people to get vaccinated, the CECC was optimistic that the remaining doses would not go to waste.

Chen said that 808 doses had been administered at the station on Sunday, followed by 2,001 doses on Monday, and the goal for yesterday was to provide more than 3,500 doses.

With the main hall of the station crowded with people lining up to get vaccinated yesterday afternoon, a large proportion of them migrant workers, CDC Deputy Director-General Chuang Jen-hsiang （莊人祥）, who is CECC spokesperson, said people who lined up before 8pm would be guaranteed to get a dose.

The CECC also announced that people can get vaccinated at Banciao Railway Station’s visitor center between 4:30pm and 8pm until Friday, and that a gift certificate would also be offered.

Minister of Health and Welfare Chen Shih-chung, right, talks with a doctor at Taipei Railway Station yesterday during an inspection of a temporary vaccination center providing the Moderna COVID-19 vaccine. Photo: CNA