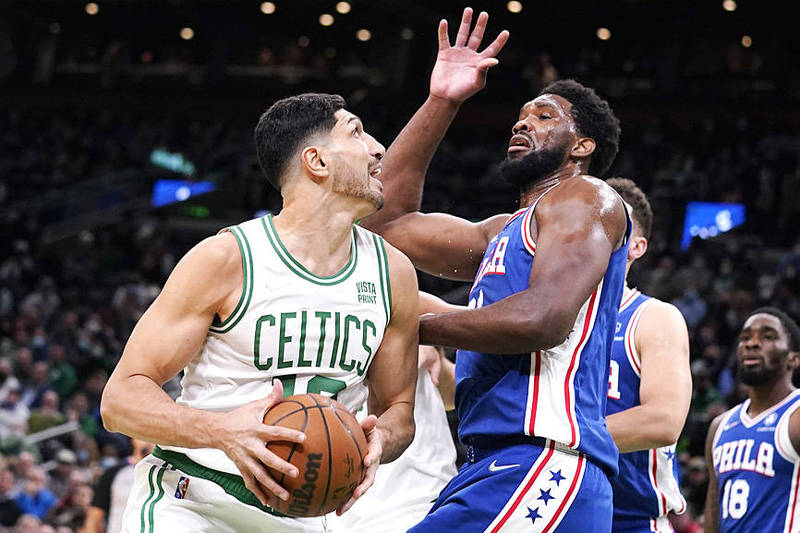 “Haven’t you had enough of that Dirty Chinese Communist Party money feeding you to stay silent?” Freedom wrote on Facebook and Twitter on Sunday.

The 29-year-old Boston Celtics center, who took a new surname when he became a US citizen on Monday last week, urged Lin: “Stand with Taiwan! Stop bowing to money & the Dictatorship.”

Lin, a US citizen of Taiwanese descent who last year obtained a Taiwanese passport, has not responded to Freedom.

Lin is one of several foreign players, including a handful from Taiwan, who are on Chinese Basketball Association （CBA） rosters.

For Taiwanese players, it is an opportunity to compete at a higher level and earn more than what they could make in Taiwan.

For Lin, it is a chance to keep his career going. He led the Beijing Ducks to the playoffs in the 2019-2020 season. Lin then joined the US National Basketball Association’s （NBA） G League last season, hoping for another shot with an NBA team that never came.

On Tuesday last week, he resigned with the Beijing Ducks and is likely to start playing when the CBA season resumes later this month.

Lin rose to fame with the New York Knicks in 2012 when he became the first American of Taiwanese descent to play in the NBA and inspired the “Linsanity” craze.

The relationship between sports and China has been an especially thorny issue since Peng Shuai （彭帥）, the former world No. 1 doubles tennis star, disappeared from public view for three weeks after early last month alleging on social media that a top Chinese official had sexually assaulted her.

Photographs and videos of Peng have since appeared in Chinese state media, and the International Olympic Committee has held two video calls with her.

However, the Women’s Tennis Association （WTA） has decided to suspend its tournaments in China because of its treatment of Peng, saying it doubted that the tennis player was free and that “none of this is acceptable.”

Unlike the WTA, the men’s Association of Tennis Professionals has not suspended its China events, and the Winter Olympics look set to go ahead on Feb. 4, despite the US announcing a diplomatic boycott of the event.

Freedom, who has been outspoken against Turkish President Recep Tayyip Erdogan, whom he considers a dictator, has recently begun to criticize the Chinese government and its human rights abuses against Tibetans, Uighurs, and Hong Kongers.

Earlier this month, he took on NBA superstar LeBron James, saying that he was putting “money over morals” with regards to China.

James replied that Freedom was “definitely not someone I would give my energy to.”

US sports journalist Jemele Hill said in an article in The Atlantic that Freedom has also been delivering mixed messages.

When asked on Tucker Carlson Tonight if he was more grateful for his US citizenship than some of his teammates, Freedom said they should feel blessed and “should just keep their mouth shut and stop criticizing the greatest nation in the world,” and focus on their freedoms, human rights and democracy, Hill said.