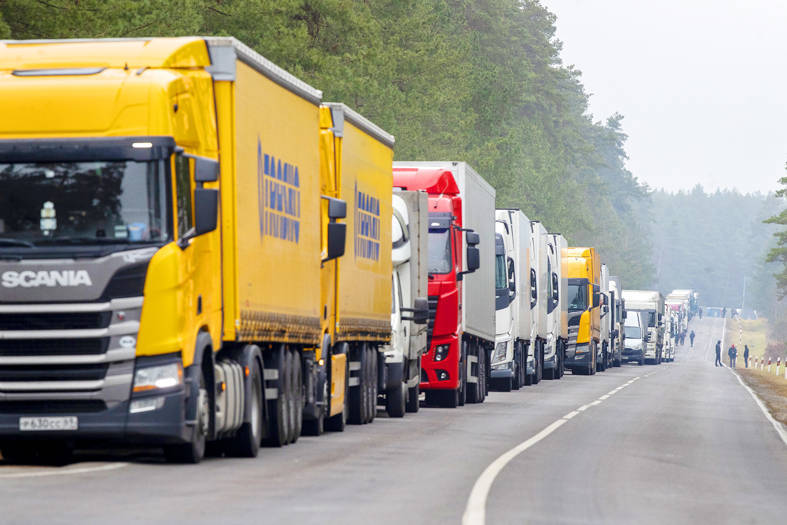 Trucks wait to be processed at Lithuania’s Raigardas-Privalka border crossing with Belarus on Nov. 13. Photo: AP

NO ENTRY: The refusal to process Lithuanian goods at Chinese ports suggests that they have been ordered to do so by an official entity, a trade group head said

The Lithuanian Ministry of Foreign Affairs has called on the governments of other EU member states to jointly respond to Beijing blocking Lithuanian exports from entering China, as “Lithuania is not listed on the [Chinese customs] system as a country.”

Lithuanian media Web site 15min.lt yesterday cited a Lithuanian wood exporter as saying that it was not allowed to unload its goods at an unnamed Chinese port.

The company said that its Chinese partner cited customs authorities as saying that any merchandise or shipments related to Lithuania would be refused, effective immediately.

Lithuanian timber exporter Sprusas confirmed that Lithuanian goods could be loaded on ships to China from ports in other EU member states, but the shipments, if connected to the Baltic country, would be rejected from customs inspections upon entering China.

Lithuania-China Trade Association manager Roka Radvilavicius told the Baltic News Service that while China has not officially imposed a ban on imports from Lithuania, the blanket refusal to process goods from the country suggests that an official entity has ordered customs to do so.

The Lithuanian ministries of foreign affairs and the economy and innovation have said that they have not received any official notification from their Chinese counterparts.

The foreign ministry said that Lithuanian firms have been facing difficulties shipping their goods to China.

The foreign ministry is looking into the issue and has reached out to the governments of other EU members to jointly respond to the issue, it said.

China on Nov. 21 downgraded its diplomatic ties with Lithuania, expressing dissatisfaction with the Baltic state after Taiwan opened a de facto embassy in Vilnius.

The office bears the name “Taiwan” instead of “Taipei,” as is common for the nation’s missions in other European countries.

Separately in Taipei yesterday, the Ministry of Foreign Affairs confirmed that a delegation from Slovakia is to arrive tomorrow in Taiwan for the first ministerial-level economic and commerce meeting between the two countries.

The 43-member delegation would be led by Slovak Deputy Minister of the Economy Karol Galek, who would be the highest-ranking member of the country’s government to visit Taiwan, it said.