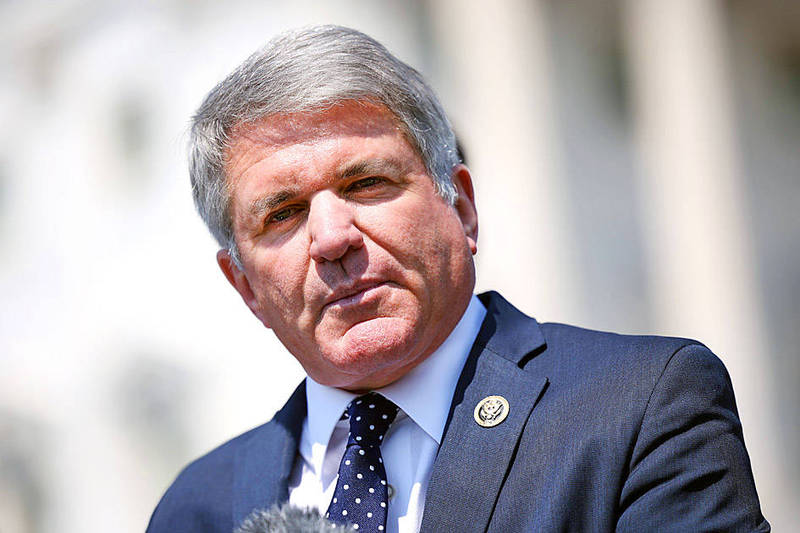 US Representative Michael McCaul speaks at a news conference at the US Capitol in Washington on Aug. 25. Photo: AFP

MISLEADING: Beijing’s attempts to impose its ‘one China’ principle have denied the world the full benefit of Taiwan’s knowledge and resources, lawmakers said

China has misrepresented a UN resolution to undermine Taiwan’s standing and participation in the international community, US lawmakers said in a statement issued on Monday, which marked the 50th anniversary of the passage of the resolution.

“The People’s Republic of China [PRC] has sought to intentionally misuse, misinterpret and mislead others on the underlying purpose of UN Resolution 2758,” Bob Menendez, chairman of the US Senate Foreign Relations Committee, and James Inhofe, a ranking member of the US Senate Armed Services Committee, said in a joint statement.

The anniversary should “serve as a turning point to correct the continued injustice of Taiwan’s marginalization on the world stage,” the statement said, adding that “Beijing should not be allowed to continue twisting history and isolating Taipei.”

The Republic of China, as Taiwan is officially known, has not been a member of the UN since the resolution was approved in 1971.

Chinese officials maintain the issue of Taiwan’s participation in the UN and its affiliates should be handled in accordance with its “one China” principle, which it claims is a guiding principle established by UN Resolution 2758.

US Representative Michael McCaul, a ranking member of the House Foreign Affairs Committee, rejected Beijing’s rhetoric, describing it as “false claims” that should be rooted out from the UN.

“Resolution 2758 does not say Taiwan is a part of China. It does not say China may represent Taiwan before the UN. It does not address Taiwan’s sovereignty — it doesn’t even include the word Taiwan,” McCaul said in a statement.

US representatives Ami Bera and Steve Chabot echoed their colleague’s view in a joint statement.

Beijing’s attempts to impose the “one China” principle on the UN and other UN member states have denied the global community the full benefit of Taiwan’s knowledge and resources, they said.

“We oppose any ahistorical reinterpretations of UNGA [UN General Assembly] Resolution 2758 that isolate Taiwan or impose Beijing’s views on other countries,” they added.