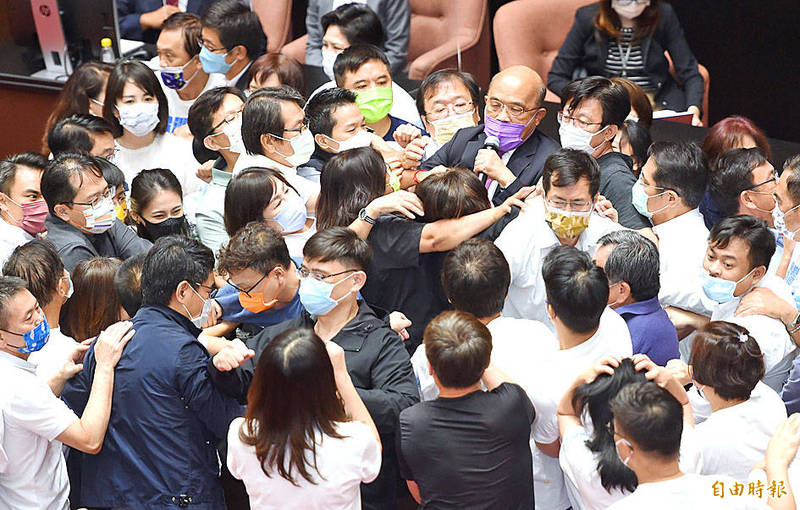 Premier Su Tseng-chang, holding microphone, is surrounded by a group of governing and opposition party lawmakers as he tries to deliver a report in the Legislative Yuan in Taipei on Sept. 28. Photo: Liu Hsin-de, Taipei Times

The Chinese Nationalist Party （KMT） caucus yesterday issued a rebuttal to former US secretary of state Condoleezza Rice, who said a fistfight in the Legislative Yuan might have been “provoked from the outside” to destabilize Taiwan.

Rice made the comment in an online discussion about the AUKUS alliance of Australia, the UK and the US hosted by the Policy Exchange forum in London on Thursday.

On mention of Taiwan, she was quoted by The Australian as predicting that Beijing would use paramilitary forces and acts of sabotage to destabilize the nation.

“There was a fistfight in the Taiwanese parliament a few weeks ago and I wondered to myself did that really happen between the people of Taiwan or was that something that was provoked from the outside?” she was quoted as saying.

On Sept. 28, Democratic Progressive Party （DPP） and KMT lawmakers pushed and shoved each other amid a boycott by KMT legislators that stopped Premier Su Tseng-chang （蘇貞昌） from taking the podium.

The KMT caucus yesterday said that, from the beginning of the legislative session last month, its protests all centered around ensuring that the government find the truth behind the cause of the COVID-19 outbreak in May and that it take responsibility for its erroneous policies.

Rice’s elevation of what was nothing more than a “difference of party opinions” on domestic policy does nothing to help calm US-China tensions, and is a misunderstanding of the culture and inter-party competition in Taiwan, the KMT said.

Citing the US Republican Party’s unanimous vote to block legislation introduced to avert a government shutdown and debt default on Sept. 27, the KMT said that Taiwan’s political leaders would not make inappropriate comments, as Rice had, as that incident was a normal part of US politics and part of the US’ internal affairs.

Rice’s comments could similarly be applied to the DPP, when its lawmakers took the legislature’s podium to block legislative sessions from proceeding when the KMT was in power, it said.

No one had made such an assumption, and no one should, it said, adding that the KMT was willing to initiate dialogue with Rice should she wish to gain a deeper understanding of the inner workings of the legislature.

The DPP had begun the habit of preventing normal legislative proceedings, the KMT added.

The DPP also endorsed a takeover of the legislature and an attack on the Executive Yuan, both acts that would not be accepted by any party or politician in the US, it said, referring to the 2014 Sunflower movement during which student protesters occupied the Legislative Yuan’s main chamber for almost 23 days and stormed the Executive Yuan building.