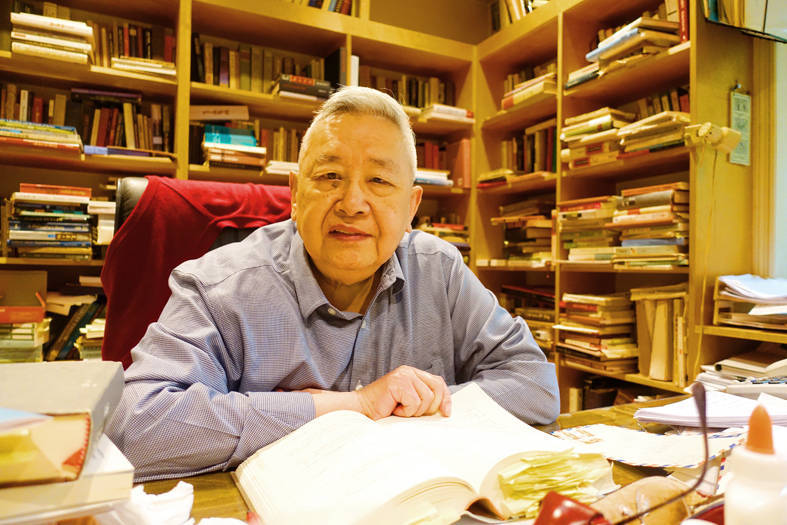 Historian Yu Ying-shih sits in his study at his home in New Jersey in an undated photograph. Photo courtesy of Asian Culture Publishing

Yu Ying-shih （余英時）, described by his peers as the world’s greatest Chinese intellectual historian, on Sunday died peacefully in his sleep at his home in New Jersey, Academia Sinica said yesterday.

Yu was “an esteemed scholar and venerable public intellectual hailed as the greatest Chinese intellectual historian of his generation,” it said.

Yu’s works spanned the entirety of China’s history, which set him apart from most historians, with a narrow, epochal focus, it said.

Born 1930 in Tianjin, China, Yu studied under the Chinese historian Qian Mu （錢穆） at New Asia College in Hong Kong before obtaining a doctorate of history from Harvard University in Cambridge, Massachusetts, it said.

He was a pre-eminent figure in China studies, it said.

He was a research fellow at Academia Sinica; professor emeritus at Princeton University in New Jersey, and a professor at Harvard and an associate professor at the University of Michigan in Ann Arbor, it said.

Yu’s academic honors include the Tang Prize in 2014, the John W. Kluge Prize of the US Library of Congress in 2006, and the Executive Yuan National Cultural Award in 1991, it said.

Outside the rarefied circle of academics he was part of, Yu was a prominent public intellectual who sympathized with the movement toward freedom and democracy in Taiwan, as well as China, including Hong Kong, it said.

Yu mentored many young historians who later became prominent academics and prompted Academia Sinica’s Institute of History and Philology to establish a prize for young students that bears his name, it said.

Readers can glimpse a spectacular and broad world in Yu’s works, said former Academia Sinica vice president Wang Fan-sen （王汎森）, a historian, adding that he had received instruction from Yu during his time at Princeton in the 1980s.

Yu was considerate toward his students and treated them as friends, Wang said.

He advocated democracy over revolution and supported Hong Kong’s democracy movements, he said.

Despite his criticism of Beijing — or perhaps because of it — Yu remained a respected figure in China’s public sphere.

The Paper, a state-owned digital media firm based in Shanghai, reported Yu’s passing in a report that largely cited the US Library of Congress’ effusive biography.

Chinese online shared thoughts on parts of Yu’s works allowed by Chinese censors, including an article against Western-centric interpretations of history, which was published in 2012 by Peking University as part of an anthology.

“This article is worthy of deep thoughts in the situation today,” one commenter wrote.