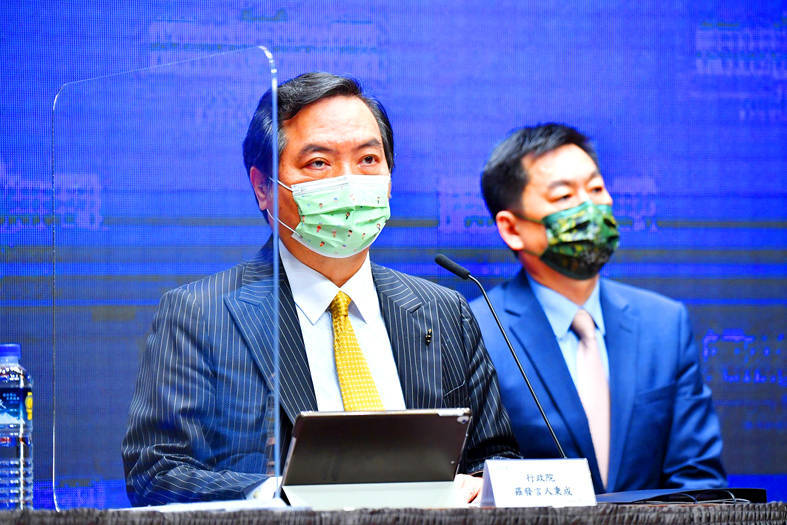 Chinese-language media have reported that the new program might be launched next month, but Lo yesterday said more planning is needed before a schedule could be confirmed.

The quintuple vouchers would be in print and digital form, with the denominations from the previous program — 200s and 500s — retained and a 1,000 voucher added, Lo said.

Each recipient would get 10 vouchers, he said.

Chinese Nationalist Party （KMT） Legislator Lai Shyh-bao （賴士葆） said that the Executive Yuan should justify spending what he estimated would be NT$13.65 billion （US$491.34 million） in administrative costs for this year’s program, more than six times what was spent last year — about NT$2 billion.

The increase in costs might be even greater to benefit contractors, Lai said.

Lo said it was impossible that the Executive Yuan would spend six times as much on administrative fees this year.

“Costs are expected to remain roughly the same as the previous program,” Lo said.

The exact amount to be spent on administration would not be known until the plans are settled, but the figure would not be what some commentators have claimed, the Ministry of Economic Affairs said.

Data showed that 21.51 million people, or 92.2 percent of the population, got paper vouchers in last year’s program, the ministry said.

The government’s goal is to promote digital vouchers, boosting their use above 7 percent, the rate they were used in the previous program, it said.

Separately, Taipei Deputy Mayor Vivian Huang （黃珊珊） on Wednesday said that the city is assessing whether it would issue subsidies in addition to the Cabinet’s planned vouchers.

The Taipei City Government would not issue paper vouchers, but is considering vouchers distributed via the TaipeiPass mobile app or direct subsidies to stores, prioritizing establishments that have been heavily affected by restrictions amid a nationwide COVID-19 alert, Huang said.

Plans for relief funding would be forwarded to the Taipei City Council next month for approval, she said.