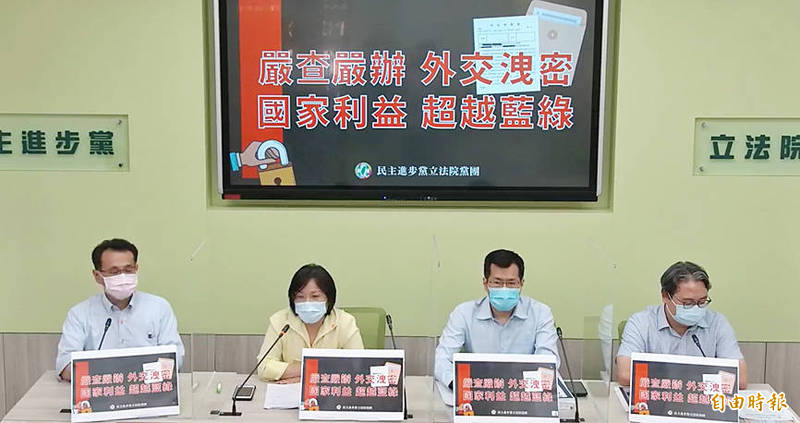 The Ministry of Foreign Affairs must conduct an internal investigation to find out who was responsible for a leak of diplomatic correspondence, the Democratic Progressive Party （DPP） said yesterday.

The DPP issued the demand after Chinese Nationalist Party （KMT） officials on Tuesday accused the government of trying to help a domestic manufacturer “find a way out” for its COVID-19 vaccine.

The KMT produced a letter, dated Tuesday last week, from the ministry to Taiwan’s embassies in nine diplomatic allies in Latin America and the Caribbean, instructing them to inquire about the host nation’s willingness to accept the Taiwan-made vaccine.

“This is a very serious case, a breach of national security. We ask that the KMT take responsibility, as this incident could damage our diplomatic relations with these allies. The ministry must immediately conduct a thorough investigation,” DPP caucus secretary-general Lo Chih-cheng （羅致政） said.

The person who leaked the document could have contravened Article 32 of the Classified National Security Information Protection Act （國家機密保護法）, Lo said.

The article states that those convicted of “disclosing or delivering classified national security information ... should be imprisoned from one to seven years.”

Lo said that the document was tagged as confidential, “therefore someone working within the ministry leaked it.”

KMT officials are using the document for political purposes to undermine the government, which could cause damage to and jeopardize diplomatic relations with these nations, Lo said.

“This confidential document was leaked by someone within our foreign affairs corps. This and other confidential material could also be leaked to China. This has serious national security implications,” he said.

Later yesterday, the KMT issued a statement that said the government’s plan “to use taxpayers’ money to purchase domestic vaccines that have not been internationally certified for foreign aid is an inappropriate policy that is outrageous and undermines the credibility of the nation.”

The decision by someone in the ministry to expose the policy was out of concern for potential damage to the nation’s image, and the DPP’s efforts to find and punish the whistle-blower shows that it has a guilty conscience, the statement said.