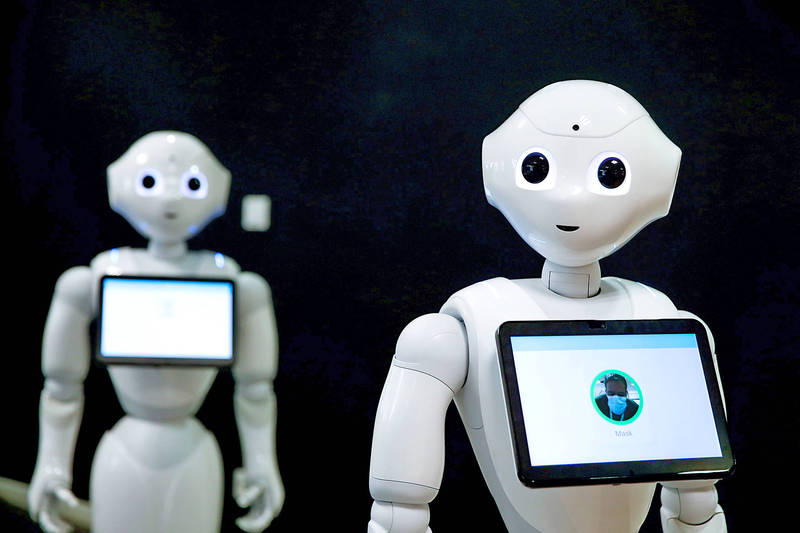 A Pepper robot, detecting whether people are wearing masks, is pictured at Softbank Robotics in Paris on Sept. 8 last year. Photo: Reuters

END OF THE LINE: Built by Taiwan’s Hon Hai Precision Industry Co, the humanoid was meant to help plug labor shortages, but struggled to find a global customer base

Softbank Group Corp is slashing jobs at its global robotics business and has stopped producing its Pepper robot, according to sources and documents reviewed by Reuters, as the conglomerate downgrades its industry ambitions.

Production of the humanoid Pepper, touted as the first robot with “a heart,” was stopped last year, three sources familiar with the matter and the documents said.

It would be costly to restart production, two of the sources said.

Built by Hon Hai Precision Industry Co （鴻海精密）, known as Foxconn Technology Group （富士康科技集團） outside of Taiwan, Pepper was meant to help plug labor shortages, but struggled to find a global customer base.

The pullback reflects the fading of Softbank chief executive Masayoshi Son’s plan to make the company the leader in the robotics industry, producing human-like machines that could serve customers and babysit children.

As part of the retrenchment, Softbank plans to eliminate about half of its 330 positions in France in September, the sources said, cutting into the historical heart of the business, whose origins lie in Softbank’s 2012 acquisition of French robotics firm Aldebaran.

Half of the workers have already been cut from smaller sales operations in the US and UK, three of the sources said, with employees in Japan redeployed from the robotics business.

All the sources declined to be named as they are not permitted to speak to the media.

In France, negotiations on layoffs are ongoing with final numbers not decided, a Softbank spokesperson said.

Staff have also been laid off in the US and UK and redeployed in Japan, the spokesperson said, declining to provide further deals.

Softbank “will continue to make significant investments in next-generation robots to serve our customers and partners,” the French robotics business said in a statement.

Softbank Robotics launched the chest-high Pepper in 2014 and it became the face of the conglomerate, embodying Son’s optimistic vision of a technology-powered future as he built his overseas investing operations.

Behind the scenes, culture clashes between the French business and Tokyo management hurt the robot’s development, and its sales were impacted by its limited functionality and unreliability, the sources said.

Softbank, which propped up Pepper sales by placing the robot in its mobile phone stores, has shifted focus to products such as cleaning robot Whiz. The French business was increasingly sidelined, the sources said.

The conglomerate has been selling assets including the majority of its stake in robotics firm Boston Dynamics Inc as Son focuses more on investing through the Vision Fund.