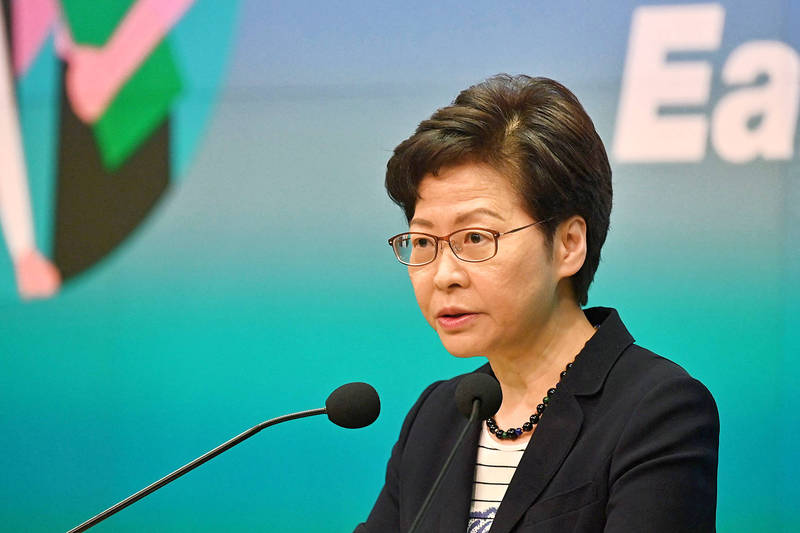 By Helen Davidson / The Guardian, TAIPEI

Lam at a regular weekly news conference yesterday defended the arrest of senior Apple Daily executives under the legislation — two of whom have been charged with conspiracy to collude with a foreign nation — as well as the raid of its newsroom and the freezing of its assets.

The Apple Daily has said it would cease online publication this week unless its assets are unfrozen. It closed its English edition yesterday.

Lam denied it was an attack on press freedom and said foreign criticism of the police operation, including from rights groups and governments, was simply an attempt to recast acts that endangered national security.

Authorities said the raid and arrests related to more than 30 articles that called for foreign sanctions against the Hong Kong and Chinese governments.

Authorities have refused to specify the articles in question, or say whether they were news or opinion.

Authorities have repeatedly refused to tell media how their work might breach the vaguely defined legislation, including through publishing quotes, comments or analysis by third parties.

She said the law was “very well defined” and “embraced all the important legal concepts,” but again gave no explanation of how it applied specifically to journalism.

“I believe media friends have the ability to grasp what kind of activities endanger national security,” she said. “It is fine to criticize the Hong Kong SAR [Special Administrative Region] government, but if there is an intent or organizing of activities to incite or subvert the government, that is another thing.”

Asked about the requests by Next Digital Ltd （壹傳媒）, the parent company of the Apple Daily, to have its assets and accounts unfrozen so it could pay its employees, Lam said the decision was up to the Hong Kong secretary of security.

Apple Daily, a pro-democracy tabloid owned by media mogul Jimmy Lai （黎智英）, has been a key target of the authorities’ efforts to stifle Hong Kong’s press.

Lai has been in jail since December last year and is awaiting trial on three National Security Law charges.

Hong Kongers have bought copies of the newspaper in huge numbers, as an apparent show of support for the beleaguered title.

Thursday last week’s raid on the newsroom was the second in less than a year and came with an unprecedented warrant to seize journalistic materials.

The move, occurring before any prosecution had begun, left the company unable to pay future operational costs or wages.

The board of Next Digital have told staff that if the funds are not released, they would likely close the paper this week.

It ceased its English-language service yesterday.

“This concludes the updates from Apple Daily English. Thank you for your support,” it said.