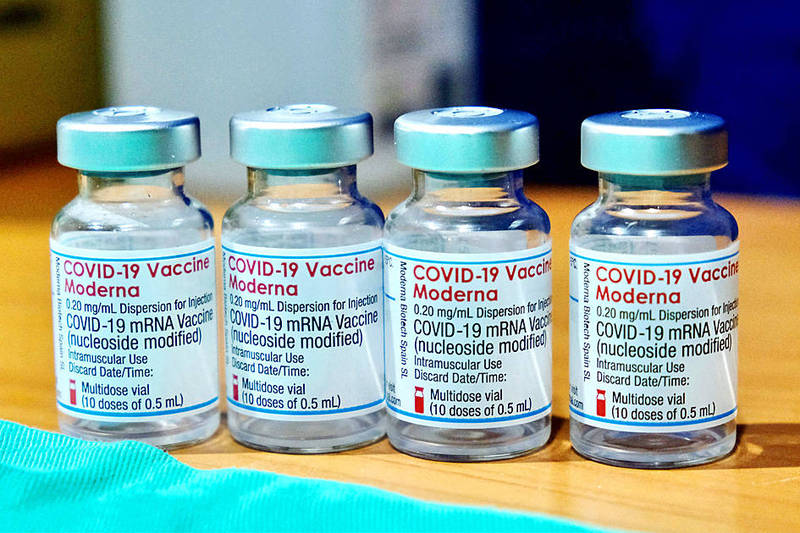 HEALTH CONCERNS: Medical research showed that pregnant women benefit from mRNA vaccines, and are at risk while visiting hospitals for testing, legislators said

Taiwan Statebuilding Party Legislator Chen Po-wei （陳柏惟） cited a New England Journal of Medicine article that said that contracting COVID-19 could affect a fetus, and recommended that the Moderna vaccine be administered to pregnant women, including those with a history of autoimmune diseases or thrombosis.

The exclusion of pregnant women puts their health at great risk, independent Legislator Chao Cheng-yu （趙正宇） said, adding that it would be difficult to separate women undergoing prenatal exams from other high-risk groups in a hospital.

Chao, without citing a source, said that research has shown that pregnant women who have contracted COVID-19 are at a higher risk of stillbirths or premature births, adding that mRNA vaccines, considered safer for pregnant women, should be administered to them as well as their healthcare workers.

The legislature is asking the Ministry of Health and Welfare to put pregnant women on the priority list for mRNA vaccines, he said.

Separately, the nation is next week to start administering 1.24 million doses of the AstraZeneca vaccine received last week as a donation from Japan.

People eligible to be inoculated can register at hospitals administering the vaccines, or online a week in advance or using kiosks at four major convenience store chains, the CECC said.

Those registering should verify where they are to receive the vaccine, it said, adding that those who do not meet the CECC’s criteria and attempt to register would not be entered into the system.

Healthcare workers are prioritized for receiving inoculation, which would be performed primarily at hospitals, the center said.

Should mass vaccinations begin, 300 hospitals, 200 Bureau of Health offices and 800 clinics would be made available to administer the vaccines, it added.

The central government would have vaccination stations across the nation, while local governments would also establish sites at governmental agencies, corporate offices or military bases.

Hospitals would be contracted to help with inoculation efforts should there be large crowds at smaller sites, while sports stadiums would be used during the holidays to offer vaccinations, the center said.

People can check their eligibility and priority by using their National Health Insurance card or other documents, it said.

Based on the current supply of vaccines, some would have to wait up to eight weeks between their first and second doses of the AstraZeneca vaccine, while those being inoculated with the Moderna vaccine need only wait 28 days between shots, sources said.