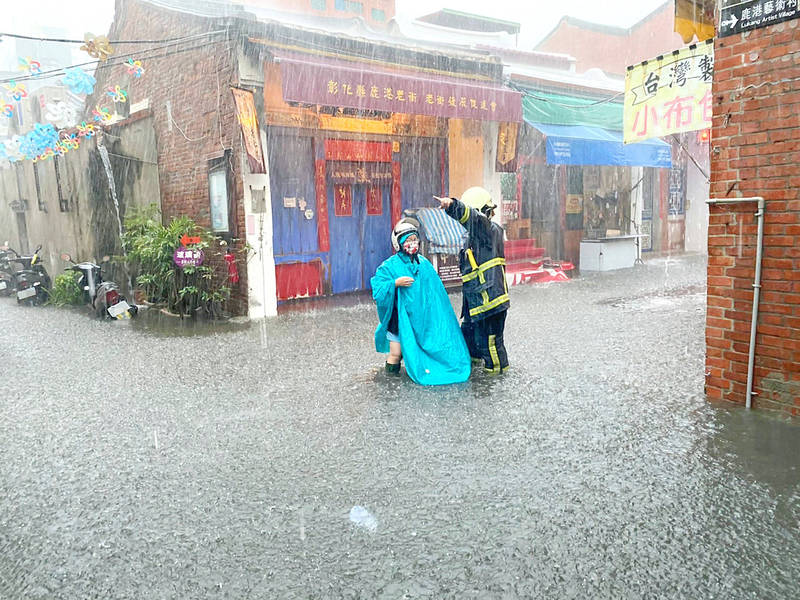 WATER SHORTAGE: Despite the large amount of rain, Changhua does not have a reservoir, so water rationing would still be implemented, Taiwan Water Corp said

A plum rain season weather front yesterday caused a flash food in Changhua County, but provided slight relief from the water shortage that Taiwan has been experiencing since last month.

As of 3:26pm yesterday, Changhua County’s Sioushuei Township （秀水） had accumulated 195mm of rain, the most in the nation, Central Weather Bureau data showed.

Nine of the nation’s top 10 accumulated rainfall volumes were recorded at the bureau’s observation stations in Changhua, bureau data showed.

Despite experiencing substantial rainfall, Changhua does not have a reservoir to store rainwater, Taiwan Water Corp （台灣自來水） said.

As such, the company would still enforce water rationing, where residents in Changhua City and other townships have their water cut off for two days of the week, it said.

Bureau forecaster Lin Ping-yu （林秉煜） said that the rain front would affect the nation until tomorrow, with high chances of showers or thundershowers along the west coast and in Yilan, Hualien and Taitung counties.

People should also beware of possible disasters caused by intense rainfall over a short period, he said.

The weather would remain unstable today, but the rain would be less intense than yesterday, he said, adding that it would rain less tomorrow than today.

The front would gradually move north on Wednesday, but the chance of showers or thundershowers along the west coast would remain, Lin said.

Cloudy skies with afternoon thundershowers are forecast for the rest of the nation, he added.

On Thursday and Friday, a southwesterly wind would affect the nation, with a high chance of showers in some regions in central and southern Taiwan, Lin said.

Cloudy skies are forecast for the rest of the nation, although some mountainous areas would have thundershowers, he said.

Another rain front is expected to approach Taiwan on Saturday, bringing rain across the nation, he said.

However, the front would be moving faster than yesterday’s, so there would be less accumulated rainfall, he said.

In other news, a tropical depression off the east coast of the Philippines could soon turn into the Northwest Pacific’s third tropical storm, which would be called Choi-wan.

As of 2pm, the tropical depression was traveling at 12kph, bureau data showed.

Moving northwest, it is forecast to be upgraded by tomorrow or Wednesday, Lin said, adding that it would travel near the north coast of Luzon Island by Thursday.

Although it is unlikely to affect Taiwan directly, the bureau is monitoring to see whether the atmospheric environment changes as it moves, he said.