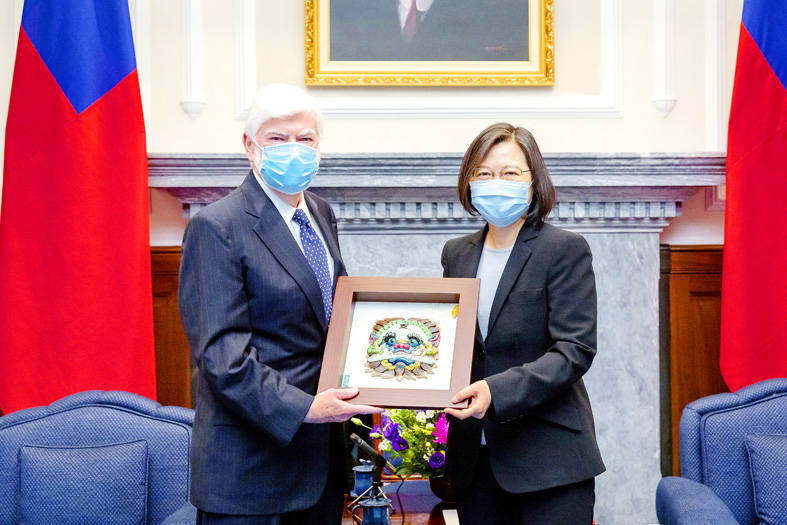 CLIMATE CHANGE: Taiwan is committed to lowering carbon and is developing green energy at full speed, while the US is seeking global cooperation, Tsai said

Trade negotiations, and safeguarding peace and stability in the Indo-Pacific region were on the agenda yesterday as President Tsai Ing-wen （蔡英文） met with a US delegation at the Presidential Office in Taipei.

Tsai said that she looks forward to resuming trade talks with Washington “as soon as possible,” and is willing to work with like-minded nations in safeguarding regional peace and stability.

Former US senator Chris Dodd, former US deputy secretaries of state Richard Armitage and James Steinberg, and US Department of State Office of Taiwan Coordination Director Dan Biers arrived in Taipei on Wednesday for a three-day visit.

The delegation was the first sent by US President Joe Biden since he took office in January.

The visit “highlights how the partnership between Taiwan and the US continues to deepen” under bipartisan support, Tsai said in her opening remarks.

She said that she was optimistic about resuming talks under the bilateral Trade and Investment Framework Agreement, which stalled in October 2016, reportedly because Taiwan was hesitant to import US pork containing ractopamine, a leanness-enhancing feed additive.

Taipei on Jan. 1 eased the restrictions, leading to expectations that trade talks would resume.

Tsai thanked the Biden administration for reiterating the importance of peace and stability in the Taiwan Strait amid increased Chinese military activity in the region.

“We are very willing to work with like-minded countries, including the US, to jointly safeguard the peace and stability of the Indo-Pacific, and deter adventurous maneuvers and provocations,” she said.

Green energy, as well as countering misinformation and cognitive warfare, are also areas for long-term cooperation between the two nations, Tsai said.

“Taiwan is committed to carbon reduction and is developing green energy at full speed,” Tsai said, especially as Biden’s administration is “taking proactive actions to cooperate with the world on the issue of climate change.”

Dodd thanked Tsai and offered his condolences for those killed in the derailment of Taroko Express No. 408 on April 2, including “the untimely deaths of two young American teachers, here in Taiwan to enrich their friendship and understanding between our two peoples.”

As someone who was involved in generating initial support for the US’ Taiwan Relations Act, the significance of the legislation “becomes even more evident with each passing year and I can say with confidence that the US partnership with Taiwan is stronger than ever,” he said.

He also expressed confidence that the Biden administration would help Taiwan expand its international space and self-defense capabilities, as well as deepen “already robust” economic ties.

Armitage, who served under former US president George W. Bush, echoed Dodd’s sentiments about the direction of ties with Taiwan under Biden.

While some previous administrations supported Taiwan in part to “vex the Chinese mainland ... [Biden’s] purpose is only to support the continuation of this great democracy,” Armitage said. “That’s the reason that Senator Dodd, Dr Steinberg and I are here.”

Steinberg, who served under former US president Barack Obama, praised Taiwan’s COVID-19 response, calling it a testament to how a democracy can provide strong and effective governance that benefits itself and the world.

Tsai hosted a dinner for the delegation at her residence in Taipei last night ahead of their expected departure today.

“Dodd is reportedly as close to Biden as friends get. Prominently mentioned earlier as a possible new ambassador to China,” Cohen wrote on Twitter on Wednesday.

“Armitage and Steinberg not only represent the respective political parties, but also are heavy diplomatic hitters who command respect and influence today,” he wrote.

“The mission is a further demonstration of the new diplomacy that is de-emphasizing the formalities of interstate relations and instead focusing on the facts and functions regardless of formal names,” he wrote.

“This is what Taiwan’s distinctive status is stimulating in many protean respects, and I hope the trend will continue,” he wrote. “It can be progressive without being unacceptably provocative.”