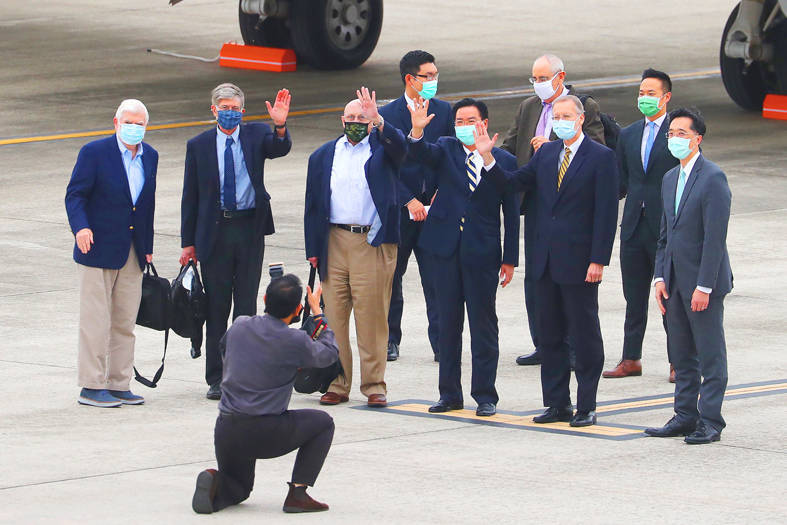 CONFIDENTIAL: The trip had not been made public until just before ex-senator Chris Dodd, and ex-state department officials Richard Armitage and James Steinberg arrived

The government yesterday welcomed an “unofficial” delegation sent by US President Joe Biden, while another delegation led by US Special Presidential Envoy for Climate John Kerry was headed to Shanghai.

Biden’s first delegation to Taiwan is made up of former US senator Chris Dodd, and former US deputy secretaries of state Richard Armitage and James Steinberg.

They are to stay in Taiwan until tomorrow.

Their arrival, on a chartered flight, had been kept confidential until media reported the visit yesterday morning, after which the Ministry of Foreign Affairs issued a short notice that they were expected to arrive at 2:40pm.

The flight landed at about 3:05pm at Taipei International Airport （Songshan airport）, where the delegation was received by Minister of Foreign Affairs Joseph Wu （吳釗燮）, American Institute in Taiwan Director Brent Christensen and other officials.

“We hope you enjoy your visit & look forward to working together to strengthen the #Taiwan #US partnership,” President Tsai Ing-wen （蔡英文） wrote on Twitter.

Dodd is known for his friendship with Biden and he was a crucial advocate of the US’ Taiwan Relations Act, which took effect in 1979, Chang said.

Armitage and Steinberg served as deputy secretaries of state during the administrations of former US presidents George W. Bush and Barack Obama respectively, he said, adding that they have visited Taiwan several times and have been friendly toward the nation.

Over the past weeks, the ministry had been exchanging opinions with its Washington counterpart about the visit, ministry spokeswoman Joanne Ou （歐江安） said, without saying when the plan was finalized.

Biden sending a heavyweight delegation to Taiwan less than three months since his inauguration — at a time when many important positions in his administration are not yet filled — shows Washington’s consistent support for Taiwan and “rock solid” bilateral ties, the ministry said in a news release.

The delegation is to meet with Tsai, Wu and Premier Su Tseng-chang （蘇貞昌） to discuss many critical issues related to bilateral ties, it said.

Meanwhile, Kerry was to arrive in Shanghai yesterday evening and is to stay until tomorrow.

His visit marks the first to China by an official in the Biden administration.

Kerry is to travel to Seoul on Saturday, ahead of a US-hosted two-day virtual climate summit starting on Earth Day on Thursday next week.

Asked about the planned agenda for the meeting between Chinese Special Envoy on Climate Change Xie Zhenhua （解振華） and Kerry, and whether Chinese President Xi Jinping （習近平） would accept Biden’s invitation to the summit, Chinese Ministry of Foreign Affairs spokesman Zhao Lijian （趙立堅） on Tuesday said that no information could be offered at that time.