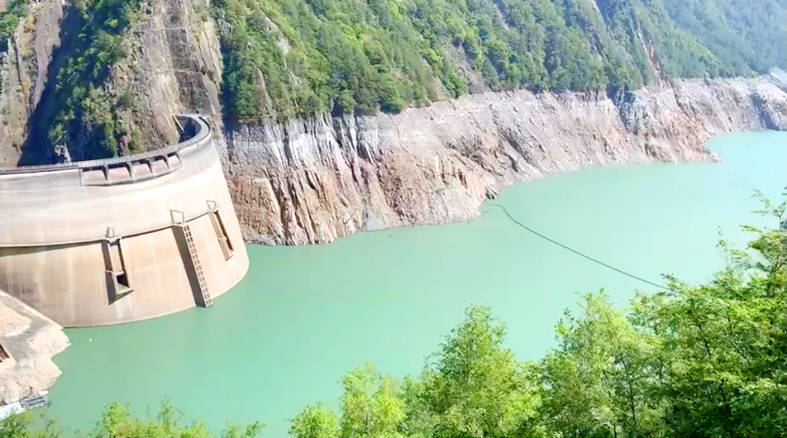 Deji Reservoir in Taichung is pictured yesterday. Photo courtesy of the Taichung Police Department via CNA

EXTREME WEATHER: Due to climate change, there is greater ‘interannual variability,’ meaning Taiwan is experiencing dramatically drier and wetter years, an expert said

Despite a “less than ideal” amount of rain this month, the nation’s manufacturers “remain unaffected” by this year’s drought, Minister of Economic Affairs Wang Mei-hua （王美花） said yesterday.

“It’s true that the weather forecasts for April are not ideal, but by continuing current water restrictions in central Taiwan, there should be enough water until the plum rain season arrives,” Wang said.

Taichung and Miaoli County have been on “red alert” since Tuesday last week, with weekly water supplies to households and businesses on for five days and off for two days.

Large parts of Taichung’s Deji Reservoir （德基水庫） are nothing but mud due to the lack of rainfall. It is at 4.6 percent capacity.

The Water Resources Agency has said that the reservoir’s water supply is likely to run out in 23 days.

The big question is whether the plum rain season, in May and June, will arrive on schedule and whether there will be the usual amount of rain.

“With the lack of typhoons last year, the reservoirs never really filled up properly,” said Chia, general director of Taiwan Sustainable Environmental Engineering Consulting Co （台灣永續環境工程顧問）. “We can probably make it to the end of May, but if the plum rain season is not ideal, the consequences could be serious.”

Chia said that the amount of rainfall during this year’s plum rain season was likely to be “on the low side,” but it is too soon to tell what the typhoon season, usually from June to October, would bring.

With the dramatic decline in rainfall over the past year, the Ministry of Economic Affairs has redoubled its efforts to conserve, manage and create new water resources, including by building a pipeline that takes water from Taoyuan to Hsinchu’s industrial parks, home to Taiwan Semiconductor Manufacturing Co （台積電） and other technology companies.

However, preparing for dry years like this should have begun a long time ago, Chia said.

“The reservoirs in Taiwan are old and terribly silted up. We still have irrigation ditches from the Japanese colonial era and the leakage rate from pipelines is high,” he said.

Due to climate change, there is greater “interannual variability,” meaning that while the average rainfall has not changed, Taiwan is experiencing dramatically drier and wetter years, Chia said.

“The clearing of the silt should have started 10 years ago, but at least now the authorities see the problem,” he said. “With good management, the nation should not ... [have] serious drought problems.”

In addition to clearing silt, repairing pipelines and irrigation canals, and rebuilding retention ponds, Taiwan should reforest its mountains to improve rainfall retention, he added.

“It is true that all our industries, including chipmaking, steelmaking and petrochemicals, are water-intensive, but 70 percent of our water use goes to agriculture,” Chia said.

The Council of Agriculture is exploring new varieties of rice that are more drought-resistant, but it is not yet ready to promote the idea to farmers, who are “used to doing things the old way,” Chia added.