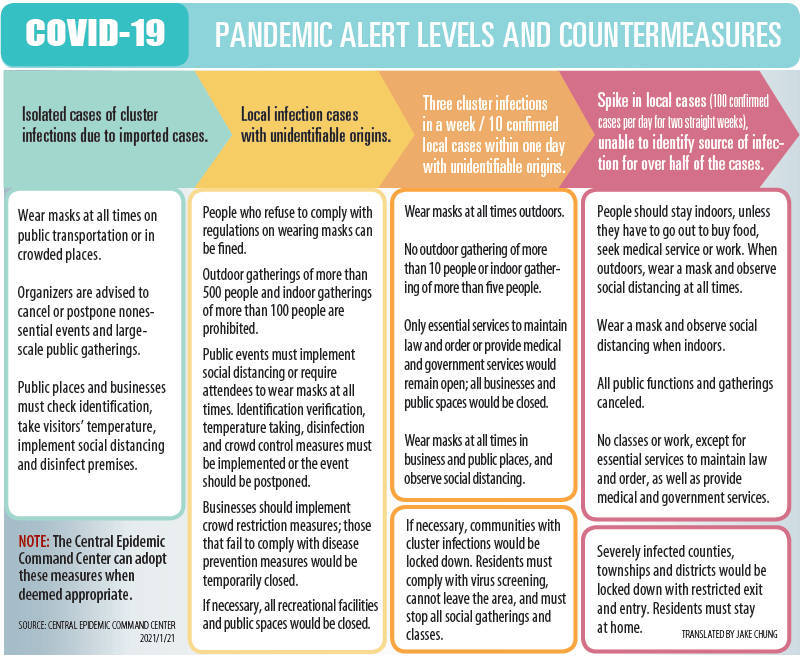 A city-wide lockdown is a measure of last resort, the Central Epidemic Command Center （CECC） said yesterday, adding that the cluster of COVID-19 infections at the Ministry of Health and Welfare’s Taoyuan General Hospital has not reached that level.

With 10 cases reported from among the hospital’s workers and their relatives, some people, including Chinese Nationalist Party （KMT） members, are asking whether the center should consider locking down Taoyuan to prevent further spread of the virus.

The CECC yesterday reported two more cases imported from the Philippines and one from Denmark, but no more from the hospital.

The hospital cluster has prompted authorities to place 564 people in isolation.

Clarifying the steps that would be taken before a possible lockdown, Minister of Health and Welfare Chen Shih-chung （陳時中）, who heads the center, told a news briefing in Taipei that it is difficult to say when the cluster case could be closed.

The fourth alert level is when there are 100 confirmed cases per day for two consecutive weeks, with more than half of those infected having unknown sources of infection.

All gatherings would be suspended, and all work and classes suspended, unless they are occupations related to everyday life, maintaining law and order, healthcare and medical services, and civil services, Chen said.

Counties, townships and districts with severe pandemic infection rates would be locked down with restricted exit and entry, Chen said, adding that residents would need to stay at home.

However, the nation is only at the first alert level, and people only need to wear masks on public transportation and in crowded areas, Chen said.

An analysis of five patients in the hospital cluster infection found that they carry the L452R and D614G mutations, the center said.

The WHO has not yet designated the L452R strain, discovered in California, as a new variant.

The entrance of the Ministry of Health and Welfare Taoyuan General Hospital is pictured yesterday. Photo: Chen En-hui, Taipei Times