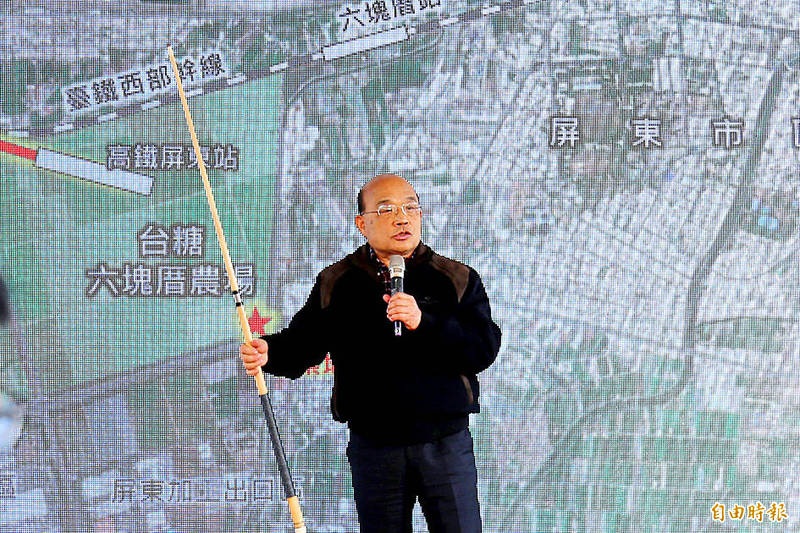 Premier Su Tseng-chang speaks about plans to set up a science park in Pingtung County at a news conference in the county on Sunday. Photo: Chiu Chih-jou, Taipei Times

COMMUNICATION: Citizen of the Earth, Taiwan said parks should be proposed based on national spatial planning, and water and power demand considered

While the Executive Yuan is considering setting up science parks in Pingtung and Chiayi counties, there is some criticism about whether science parks are needed in every city and county.

Minister of Science and Technology Wu Tsung-tsong （吳政忠） on Wednesday told a news conference that the government is planning a new type of science park on less than 100 hectares to promote innovative, energy-saving businesses and improve community relations.

Wu’s remarks came after Premier Su Tseng-chang （蘇貞昌） visited Pingtung on Sunday to inspect the planned site for a new high-speed railway station and announced a plan to establish a new science park.

Su on Dec. 19 last year inspected industries in Chiayi, where he promised to evaluate the possibility of setting up a science park.

He reaffirmed the promise after dining with Democratic Progressive Party （DPP） lawmakers on Wednesday night — the eve of the second anniversary of his premiership.

However, some Internet users have questioned whether the plans would only benefit business speculators and why some science parks in agricultural regions, such as in Changhua County, lay idle.

Citizen of the Earth, Taiwan deputy executive director Tsai Chung-yueh （蔡中岳） said that the government should develop detailed plans for parks before announcing them.

First, it should determine which plots of idle land are not part of proposals and find out what resources are needed by Taiwanese businesses returning home, he said.

Instead of developing separate plans, the science ministry and the Ministry of Economic Affairs — which oversees industrial parks — should communicate, he added.

The government should make plans from the perspective of national spatial planning and tell the public what might be sacrificed by erecting new science parks, he said.

If science parks are to house businesses related to semiconductors and electronics, the government should assess how much water and electricity would be needed, and push the companies to commit to using renewable energy sources, he said.

Making promises without proper advanced planning is irresponsible, Tsai said, questioning whether such a policy would truly benefit local development.

Overseen by the Hsinchu Science Park Bureau, the Yilan Science Park and the Tongluo Science Park in Miaoli County are only 24 percent and 63 percent rented respectively, the data showed.

Water and electricity are not a problem at the planned site in Pingtung, but could be more of a challenge in Chiayi, Minister of Economic Affairs Wang Mei-hua （王美花） said on Thursday, adding that the government would evaluate whether to build a seawater desalination plant in Chiayi.