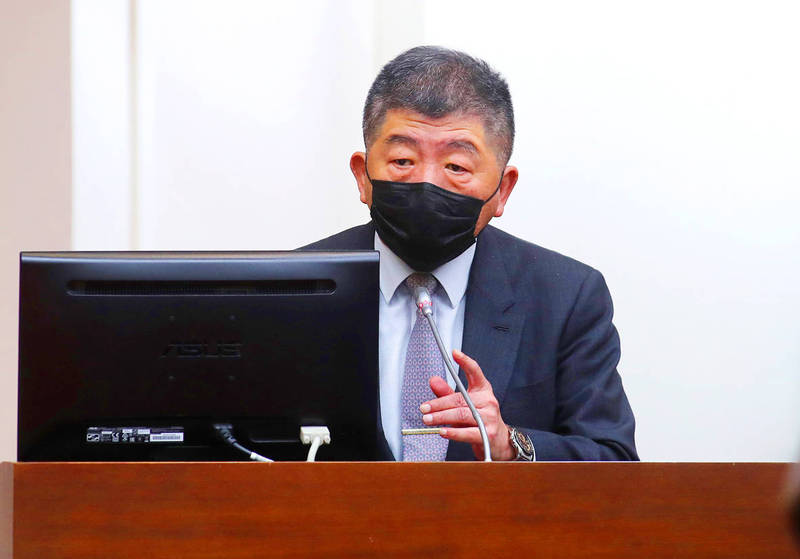 Minister of Health and Welfare Chen Shih-chung speaks at a meeting of the legislature’s Finance Committee in Taipei on Monday. Photo: CNA

A total of 84 healthcare facilities have been designated to provide COVID-19 polymerase chain reaction （PCR） tests that people planning on traveling abroad can pay for themselves, the Central Epidemic Command Center （CECC） said yesterday, as it reported six more imported cases.

The list of sites, as well as the examination times and fees, have been published on the Centers for Disease Control’s （CDC） Web site.

The PCR tests cost between NT$5,000 and NT$7,000, and 37 of the facilities can provide rapid testing services, providing same-day results, the CECC said.

Fifty-seven of the facilities would provide the testing services during the Lunar New Year holiday, said Minister of Health and Welfare Chen Shih-chung （陳時中）, who also heads the CECC.

People planning to travel abroad are advised to check what documentation and formatting of the test reports are required by their destination before getting a test, he said.

Chen said the latest imported cases were three Indonesian migrant workers, a Frenchman, a Cypriot and a Taiwanese who is a permanent resident of the US.

They tested negative during a special project on Friday last week that gave PCR tests to 939 Indonesian migrant workers housed in centralized quarantine facilities, but when tested again before their quarantine period ended on Monday their tests came back positive.

Case No. 683 is an Indonesian man in his 20s who arrived on Nov. 14 and whose company paid for him to be tested on Sunday as his stay at a quarantine hotel was ending, Chen said.

While the man had no COVID-19 symptoms, his test came back positive yesterday, he added.

Case No. 684 is a Taiwanese in his 30s who returned on Sunday last week and began suffering a mild abnormal sense of smell later that day while he was at a quarantine hotel, Chen said.

The man’s symptoms worsened two days later, so he reported his condition and was tested on Thursday last week, and the result came back positive yesterday, he said.

Fifteen passengers who sat near Case No. 684 on the flight to Taiwan have been put under home isolation, Chen said.

Case No. 685, the Cypriot, arrived on Sunday from the US for a business trip, but had a temperature of 38.6°C upon arrival at the airport, so he was asked to take a test and stay at a centralized quarantine center while he waited for the result, which returned positive yesterday, Chen said.

Case No. 686 is a Frenchman in his 50s, who had been invited by a local company to attend a business event. He arrived on Nov. 20 after transiting through Turkey on Nov. 19, Chen said.

The man developed a sore throat on Friday last week at a quarantine hotel and was tested on Monday, and the result came back positive yesterday, he said.

“We can see from these cases that there have been inconsistent test results ... so we are not considering loosening the mandatory home quarantine regulation,” Chen said.