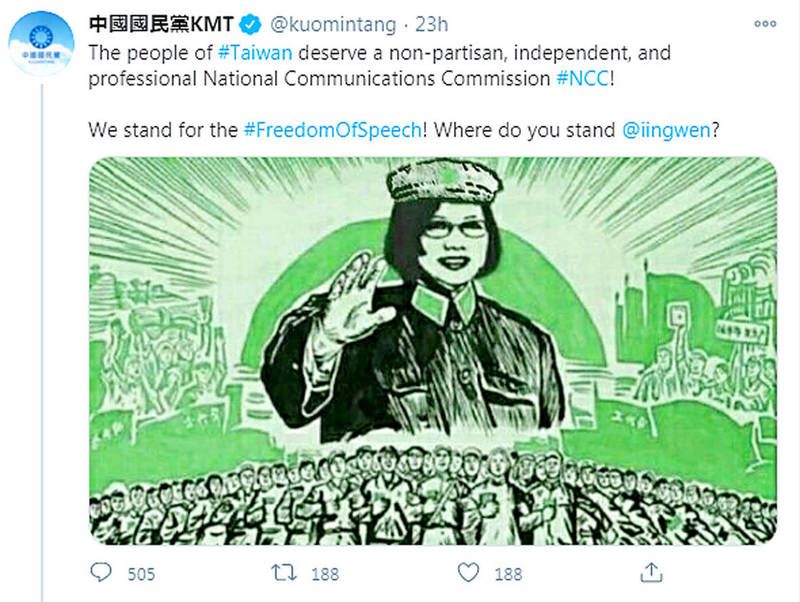 DPP caucus whip Cheng Yun-peng （鄭運鵬） said that the post has turned into an “international joke.”

“As a citizen of this country, I feel quite ashamed of it,” Cheng said.

The KMT on Tuesday shared the image with the text: “The people of #Taiwan deserve a non-partisan, independent, and professional National Communications Commission #NCC! We stand for the #FreedomOfSpeech! Where do you stand @iingwen?” using the president’s Twitter account name.

The KMT has objected to an NCC review of CTi News’ （中天新聞台） operating license, calling it suppression of free speech.

The image was compiled of a drawing of Mao — made during the Cultural Revolution in which he is depicted wearing a cap of the Red Army and waving over a crowd of Red Guards — with his face replaced with Tsai’s.

“The whole world knows they have no media freedom in China and no freedom of expression,” he said. “People know that the KMT has a pro-China political stance.”

“The KMT has contradicted itself through this post, given its stance on cross-strait relations while touting freedom of expression,” Cheng added.

DPP Legislator Chen Ting-fei （陳亭妃） said that the KMT had gone too far.

“It is ridiculous for the KMT to portray Tsai as Mao Zedong, as the [CTi News] issue has nothing to do with freedom of expression,” Chen told reporters at the legislature in Taipei. “When the Twitter post came out, we thought it was made by a KMT auxiliary group. Then we learned it was the KMT itself and on the party’s official site.”

“Has the KMT regressed so far that it would make a joke in such poor taste to be ridiculed by the international community?” she asked. “People are wondering what level the KMT would not stoop to.”

“Tsai Ing-wen was elected through a popular vote in a democratic system, while Mao was a dictator,” top officials of the DPP wrote in a statement. “How could the KMT make such a comparison?”

“It is hard to believe that the KMT would post this on an international social media platform... Many people have left messages of criticism and ridicule,” DPP spokeswoman Hsieh Pei-fen （謝佩芬） said.

“It is only the KMT that is using social media for smear campaigns while eschewing statements of its position on policy issues,” Hsieh said. “It posted an extremely absurd picture to vilify our nation’s leader. Despite being on the opposite side of the aisle from the KMT, the DPP is embarrassed by its post.”

She also quoted French researcher Antoine Bondaz, who wrote: “How pathetic for the KMT, supposedly a serious political party that aspires to govern Taiwan, to compare Tsai to Mao... Know your own history, and be a little bit more responsible.”

“Led by President Tsai, Taiwan’s political environment is now close to entering a rule by ‘Taiwan’s Hitler’ and Empress Wu Zetian,” Sufin said at the time.

During the presidential campaign in 2004, the KMT ran full-page advertisements in Taiwan’s five major newspapers comparing then-president Chen Shui-bian to Hitler, with the ads showing Hitler in his full military regalia and a message to Taiwanese saying: “Let’s end [Chen Shui-bian’s] dictatorship.”

New Power Party international department director Daniel Liu （劉仕傑） said that there is no connection between Tsai and Mao, so the post only exposed the contrast between them.