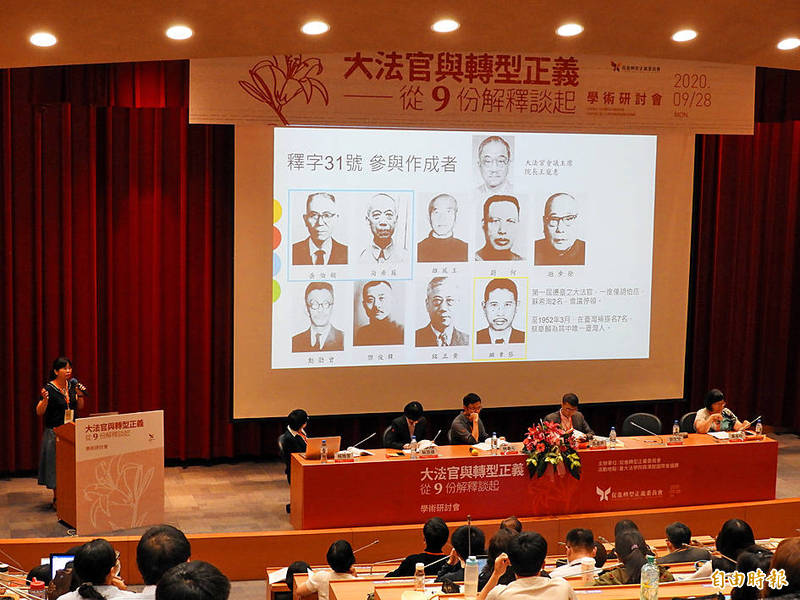 ‘ORDER FROM ABOVE’: The Council of Grand Justices served as a rubber stamp to consolidate the KMT’s power, and its members rarely challenged the party’s wishes

The Transitional Justice Commission yesterday held a conference at National Taiwan University to discuss nine of the constitutional interpretations made by the Council of Grand Justices during the Martial Law era.

The roughly 300 interpretations made during the era were largely related to the establishment of laws and bodies used to consolidate the Chinese Nationalist Party’s （KMT） authority, commission Chairwoman Yang Tsui （楊翠） said.

Whereas grand justices would rule independently in a functioning democracy, they served as puppets of the authoritarian government during the Martial Law era, he said.

Interpretation No. 31, which concerned the establishment of the National Assembly, was completed in only five days, he said.

“As you can imagine, it would be impossible to thoroughly discuss the issue in that time frame. They probably had an answer before deliberating,” he said.

The KMT kept extending the terms of its legislators, thus “putting the ball in the grand justices’ court,” he said, adding that this gave the party’s political actions “the outward appearance of being legal.”

Deliberations on Interpretation No. 129, which touched upon the children of Chinese Communist Party members, were rare in that some grand justices opposed the KMT’s wishes, he said.

“One of the grand justices in opposition, Lin Chi-tung （林紀東）, was lobbied to fall in line. Another grand justice told him directly: ‘This is an order from above,’” Lo said, adding that the KMT had party members sit in on the deliberations.

“Unfortunately, the name of the grand justice who lobbied Lin is one of those kept confidential by the Judicial Yuan. To this day the public still has no way of knowing who it was,” he said.

Historical facts and names should be public not to reprimand those involved with past injustices, but to let the public better understand how the past authoritarian government manipulated the judiciary, he said.