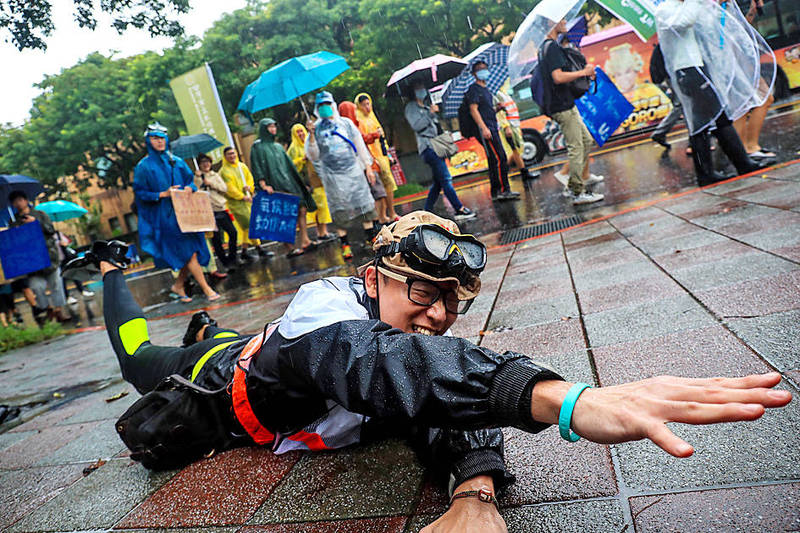 A participant in a march in Taipei yesterday pretends to swim through a flood caused by rising sea levels brought about by global warming. Photo: CNA

TAIPEI MARCH: DPP Legislator Hung Sun-han told the crowd that global warming is not the ‘deadliest enemy,’ the main enemy is people’s willingness to push their luck

More than 1,000 people braved yesterday’s rain to march in Taipei to back calls for more government action on climate change, organizers said.

The march was held in solidarity with the global Fridays for Future movement inspired by Swedish activist Greta Thunberg in 2018, which called for a global day of action on Sept. 25 this year, organizers said.

The march, which began outside the Legislative Yuan at about 2:45pm, was organized by several environmental groups, including the Taiwan Youth Climate Coalition; the Green Citizens’ Action Alliance and Citizen of the Earth, Taiwan, and backed by nearly 50 other groups, including many student organizations.

Participants held placards with messages such as “There is no planet B,” “We do not have time. Act now or swim later” and “2050 net zero carbon emissions. Taiwan must help.”

As they marched, they chanted: “The climate is in an emergency. Reform is imperative,” “Six major demands. Give me back the Earth” and other slogans.

“The main purpose in us standing up and gathering here today is to let everyone know that the climate emergency is not a personal problem,” Liao said.

“The climate emergency is not something we can solve individually by not using air-conditioning,” she said, adding that the issue requires change from “the entire society,” including the citizens, the government and industries.

“We hope the voices we have gathered here today can be spread to the Legislative Yuan, to the Executive Yuan and to the Presidential Office, to let everyone know that the climate emergency is a problem, and a problem of generational justice,” she said.

Over the past few days, people in countries where the COVID-19 situation is severe still held events to protest their governments’ disregard of the climate crisis, because they are “very, very anxious” about the crisis, Hung said.

One participant, Ita Chen （陳靖瀅）, a fourth-year political science student at National Taiwan University, said: “If you really want to change the future of this planet, and this ‘status quo,’ start by taking action yourself.”

Chen is a member of uCup, a student club at the university that promotes reusable cups.

The protesters listed six demands for the government, staring with the need for a declaration that Taiwan would reach net zero carbon emissions by the year 2050.

Climate change should be treated as a national security crisis, and the Presidential Office or the Executive Yuan should be responsible for coordinating the nation’s response to the issue, they said.

They called for the introduction of Taiwan’s version of a “green deal,” improving public awareness and ability to respond to climate change, the inclusion of different ethnic groups in the discussion of the nation’s climate policy and increased investment in climate science research.