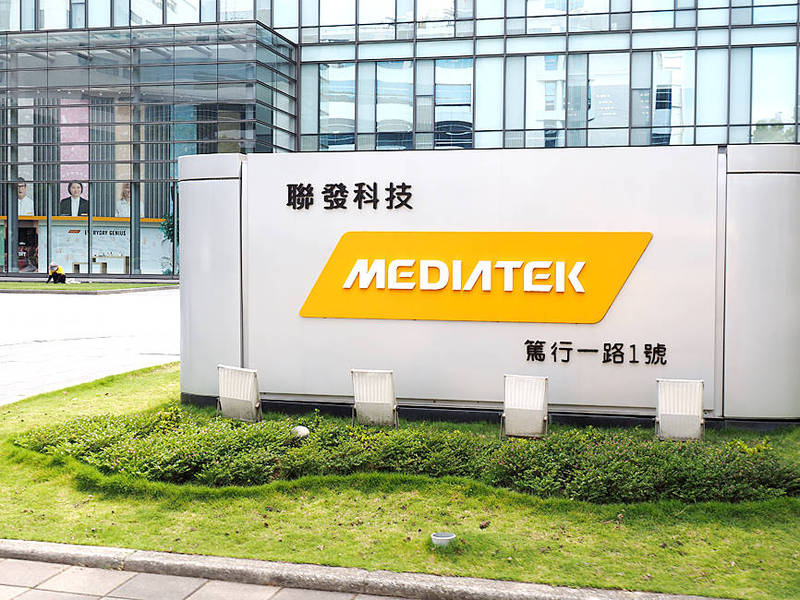 MediaTek Inc’s logo is pictured outside its headquarters in Hsinchu on May 15. Photo: David Chang, EPA-EFE

NO WAY OUT? Investors were concerned that expanded rules to prevent Huawei from obtaining chips using US tech would affect suppliers like the Taiwanese chip designer

The sell-off was sparked by the US Department of Commerce’s announcement on Monday of changes that build on restrictions announced in May, adding 38 Huawei affiliates to an economic blacklist and imposing license requirements on any chip procurement transactions.

The new regulations aim to further limit Huawei from obtaining foreign-made chips developed or produced from US software or technology, the department said.

Investors were concerned that the latest restrictions would prevent Huawei from obtaining chips from MediaTek and other suppliers that use US technology, software and even equipment for designing and manufacturing chips.

MediaTek said in a regulatory filing yesterday that the US’ latest rules “should not have a significant impact on the company’s operation in the short term.”

“The company is closely monitoring any changes in the US’ export restrictions,” it said.

MediaTek shares dipped 9.93 percent to close at NT$617, with a record-high daily turnover of 42.33 million shares.

“The Chinese firm has tended to use more MediaTek chips over the past six or nine months due to the US-China trade friction,” Eric Chen （陳慧明）, managing partner at Cornucopia Capital Partner Ltd （聚芯資本）, said by telephone.

“However, the US’ export controls deprive MediaTek of such advantages over US rival Qualcomm Inc, as any chips shipped from either MediaTek or Qualcomm would be subject to the [US] commerce department’s review,” Chen said.

Yuanta Securities Investment Consulting Co （元大投顧） said in a research note that the latest US ban might only affect MediaTek negatively in the short term, if China’s de-Americanization policy regarding its supply chains continues.

The US ban could result in a reduction of shipments in the fourth quarter, Taiwan Institute of Economic Research （台灣經濟研究院） researcher Arisa Liu （劉佩真） said by telephone.

“The stock price of MediaTek has inflated significantly over the past months on speculation that MediaTek would benefit from the US’ ban on Huawei’s access to US technology in May,” Liu said, adding that MediaTek was originally expected to supply high-end 5G chips for Huawei’s smartphones after the Chinese technology giant ran out of chips designed by its semiconductor arm, HiSilicon Technologies Co （海思半導體）.

As of yesterday, MediaTek shares had surged more than 50 percent since the commerce department announced restrictions on Huawei in May.