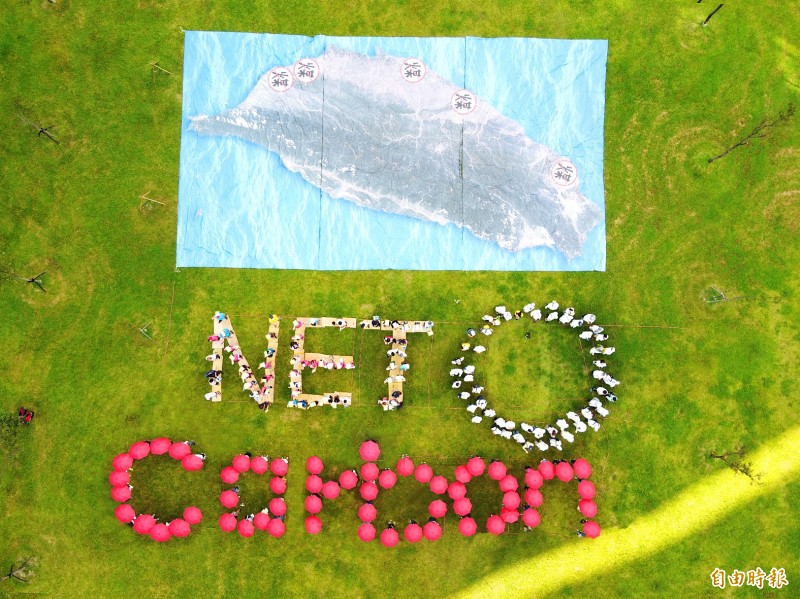 CARBON NEUTRAL: While the organizers urged the government to do more to reduce pollution, the EPA said its efforts had reduced the number of ‘red’ air alerts in Taichung

Environmental groups yesterday held a parade in Taichung, calling on the government to work harder to cut air pollution and coal use, and outline plans to achieve a carbon-neutral society.

Participants gathered at a park in front of the city government’s new municipal building and marched to the Executive Yuan’s Central Taiwan Joint Services Center.

This year is the most crucial time for people to choose a future of sustainability or extinction, Lin said.

The mayor called on the government to face environmental crises by making climate action a priority and working harder to cut coal use.

The parade organizers urged the government to declare a climate emergency and promote new “green” policies; improve air pollution and cut coal use, especially in central and southern municipalities; and announce a timetable to achieve a carbon-neutral society by 2050, Yeh said.

The Environmental Protection Administration （EPA） yesterday said in a statement that the government agrees with the groups on reducing pollution.

Since 2018, the EPA and the Ministry of Economic Affairs have tracked pollutants emitted by coal-burning power plants and other major state-run enterprises, and have created plans to cut pollution, it said.

Increasing power generation from green energy and natural gas, and reducing the use of coal-fired power are central to the government’s policy for curtailing pollution, the EPA said.

In Taichung, the frequency of “red” air quality alerts from monitoring stations — meaning that the air quality has reached an unhealthy level for all people — fell from 71 times in 2016 to five last year, it said.

In areas in Kaohsiung and Pingtung County, the frequency of red alerts decreased from 279 times in 2016 to 50 last year, it said.

To establish more carbon reduction tools and incentives, the EPA is preparing amendments to the Greenhouse Gas Reduction and Management Act （溫室氣體減量及管理法）, the EPA said.

It has also created an online “climate talks” platform to promote its pollution control efforts and gather opinions about its next actions, it added.

Members of environmental and healthcare groups hold signs with pro-environmental slogans at a news conference in Taichung yesterday before a parade calling on the government to cut air pollution and coal use. Photo: Su Chin-feng, Taipei Times