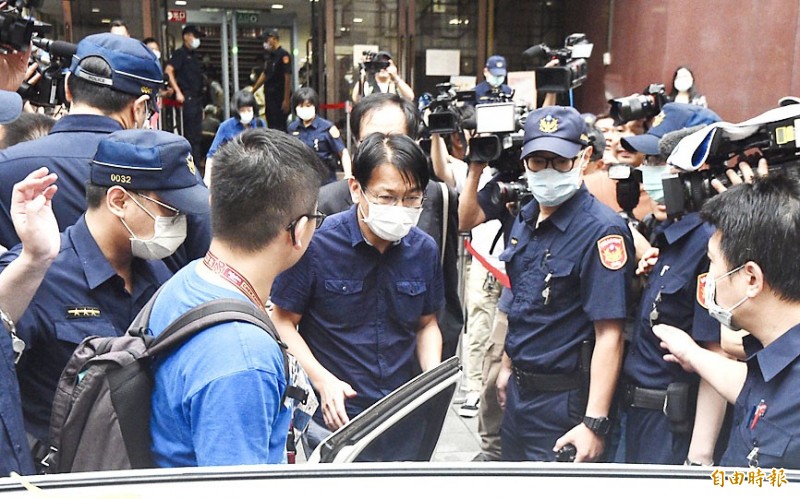 ‘CORRUPTION’: One DPP lawmaker and two KMT legislators were held incommunicado, while former NPP chairman Hsu Yung-ming was released on bail in the Pacific Sogo case

The Taipei District Court yesterday ordered that three lawmakers be held incommunicado amid a probe into allegedly bribery relating to an ownership dispute over Pacific Sogo Department Store （太平洋崇光百貨）.

The Taipei District Prosecutors’ Office on Friday raided the offices of six incumbent and former lawmakers for allegedly taking bribes ranging from several hundreds of thousands of New Taiwan dollars to NT$20 million （US$677,071） from Lee Heng-lung （李恆隆）, the former chairman of Pacific Distribution Investment Co （太平洋流通）, who was also detained yesterday.

The case involves the largest number of lawmakers simultaneously detained since the nation was democratized in 1992.

Hsu’s implication in the scandal has shocked many among the so-called “2014 Sunflower movement generation,” as the NPP was founded by building on the movement’s momentum.

Evidence appears to show that Hsu had made a commitment to the bribers, but whether he accepted the bribe is unclear, the court said, adding that Hsu is forbidden to contact related witnesses.

“I cannot disclose details about the case, but I am absolutely innocent,” Hsu told reporters after his release.

Taipei prosecutors said that the lawmakers are suspected of taking bribes from Lee in 2018 to lobby the Ministry of Economic Affairs to amend Article 9 of the Company Act （公司法） relating to capital increases and to make them retroactive.

The proposed retroactive clause, which might have allowed Lee to take back ownership of the department store chain from Far Eastern Group （遠東集團） chairman Douglas Hsu （徐旭東）, did not pass.

Independent Legislator Chao Cheng-yu （趙正宇） was accused of taking bribes from funeral services proprietors Chen Ming-han （陳明瀚） and Chung Ke-hsin （鍾克信） through Kuo. Chao allegedly pressured the Construction and Planning Agency to alter the classification of a plot of land in Taipei’s Yangmingshan National Park （陽明山國家公園）, so the proprietors could build a cemetery.

Chao was released on NT$1 million bail on Sunday, while his former aide Lin Chia-chi （林家騏） was detained incommunicado.

The prosecutors’ office on Monday said that Chao should be detained, and has appealed the court’s decision.